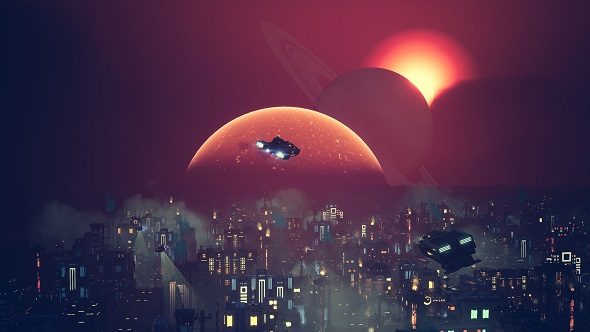 It looks like the Crypt of the NecroDancer devs are taking their rather stylish hand to a new genre, moving away from rhythm action gameplay and towards… city building. Industries of Titan is the newest title from Brace Yourself Games, and challenges you to create your own city on Saturn’s largest moon, Titan.

For more indie goodness, here are the best indie games on PC.

As reported by PC Gamer, it already has its very own Steam page, but details are sparse beyond some screenshots and GIFs. Those are some snazzy screenshots and GIFs though. There’s something enticing about how grimy it all looks, but that may just be the Londoner in me coming out.

The announcement trailer is above, and shows how it’s going to try to add something to the city building genre: you’ll have a strong hand in law enforcement. If a ship flies over your city that you don’t like, you’ll be able to shoot it down (and presumably deal with the consequences when it crash lands).

Danny Baranowsky, the person behind Crypt of the NecroDancer’s killer soundtrack, is doing the music, too, so Industries of Titan will almost certainly sound great. There are no details concerning a release date yet asthe Steam page just says “coming soon.” Very soon, we hope.