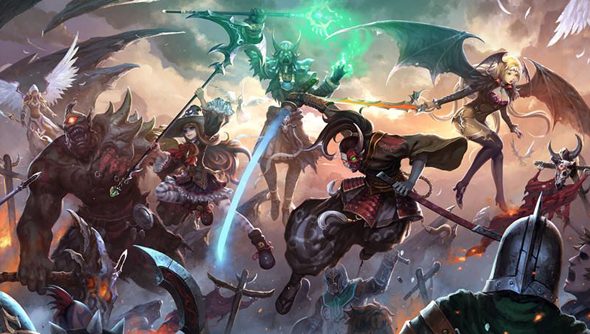 You might admire the brazenness of Inferno Legend, and its wilful, repeated self-comparison to both Diablo and World of Warcraft. But that’s because you haven’t yet seen its trailer, which plays like something out of whichever Dynasty Warriors entry I was playing in 1996.

You had my attention, Inferno Legend. Now you have my complete and utter bewilderment.

The pull of this “anti-Diablo” MMO is clear – you’re cast as a demon, slaying the awful humans and angels who’ve driven your people below ground in an unjust and overlong war.

Players can join up with their fellows, obviously, but also build up their own AI “devil army” from a menagerie of summonable servants. Planning formations upfront according to their various attributes will be a crucial strategic consideration, I’m intrigued to learn.

And in contrast to that great MMO standard, the all-day-download, Inferno Legend makes use of a “nano client” which is said to dramatically reduce its file size without meaningful compromise.

From there, though, things start to look a little less heavenly. There’s nary a screenshot to be found across the game’s official site, nor its Facebook page. Let’s hope the 1996 maxim that cutscene looks approximately eight times better than its parent game doesn’t hold true here, because, uh:

If Pixar got drunk on early Final Fantasy and forgot to make Luxo Jr in 1986, this is the short they might have come up with. Though I imagine their continuity editing wouldn’t see a wizard mysteriously lose his entourage and promptly turn into a portal.

Closed beta testing for Inferno Legend is due to begin on December 10. Perhaps you’ll reward it for its bravado?