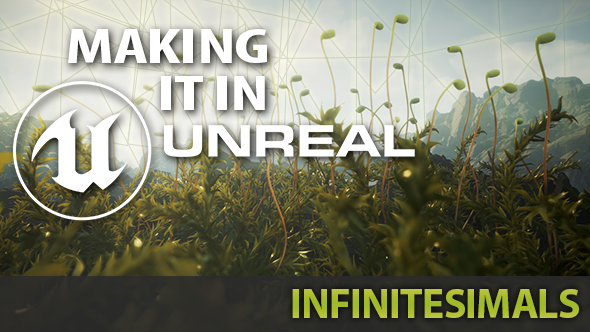 Infinitesimals casts you as an alien creature, no taller than 2mm, cast adrift in an Earth-like countryside. Or perhaps it’s one garden: a lawn looks like a forest at this scale, and the intimidating terrain would be untraversable if not for the pod – a six-legged vehicle that strides across the land with you in it. This is a microscopic open-world adventure, inspired by developer James McWilliams’s lifelong love for nature.

“Looking at nature from this scale makes it look very alien,” McWilliams says. “Turning what is, to us, a mundane thing like grass into a jungle and looking at the world from that perspective is interesting to me.”

It’s also proven to be a brave new world of technical hurdles for McWilliams and co-developer Cameron Angus to clamber over, each of them like the game’s broad blades of grass. 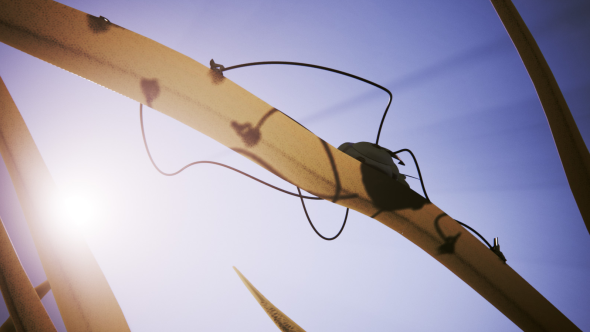 Infinitesimals is built in Unreal Engine 4, which allows developers into its source code to fiddle with the details. That’s just as well, since so many conventional tools that contemporary developers rely on are off-limits to McWilliams and Angus – simply because of their game’s tiny scale.

“It’s a big factor that’s still being worked out,” McWilliams explains. “Engines always assume a certain scale. If you think about applying vegetation to your height map, that’s all very tailored to having grass and detail scattered [at human scale]. Our grass blades are trees.”

Typically, a patch of earth might be normal mapped – that is, created as a technically flat texture that fakes the shadows of undulating roughness. But here it becomes a new type of extreme terrain.

“We have to do a little more work,” McWilliams says. “I can’t fall back to doing that stuff as easily at the scale we’re trying to do.”

The leggy pod only presents more problems. Where a less unusual game might rely on the visual trickery of shaders to mimic the sway of a tree back and forth, Infinitesimals’ mammoth grass needs to be fully interactive – since the vehicle can scale near vertical surfaces. Although it doesn’t yet. That’s a whole other set of unique challenges.

Procedural animation and the pod 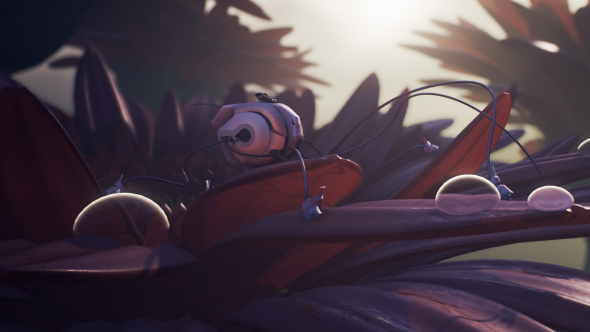 The pod, with its lean, wiry legs and strange fluidity, is an elaborate piece of science fiction in the mode of HG Wells. But, despite appearances, it was born from practical considerations.

“To the scale of the pod, no bigger than a centimetre, soil is really rough terrain,” McWilliams points out. “You couldn’t have a wheeled vehicle going over that. It wouldn’t be able to cope.”

The developer quickly realised that a standard animation system wasn’t going to cut it for this pod. Developers typically slide characters around game worlds in capsule colliders – invisible boxes that check for collision – while playing complex movement animations over the top. But that kind of illusion wouldn’t deliver the sort of dynamic walking simulation that McWilliams wanted. Instead, he and Angus have created a custom tool from scratch.

“I wanted it to respond in very believable ways and to be a physics simulation,” McWilliams says. “It’s very difficult, but it’s getting there.” 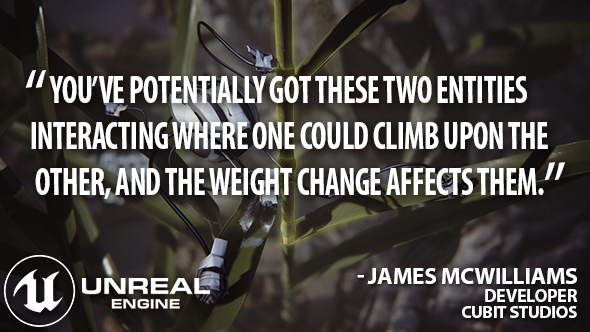 Inspired by the early MechWarrior games and Tie Fighter, the pair have approached the pod from the semi-scientific standpoint of hard sci-fi. When the vehicle plants a foot on the ground, that act applies an appropriate force to its body. And when there are no feet on the ground, the body will fall under gravity.

“That has a lot of implications for gameplay down the line that we’re still trying to explore,” McWilliams notes.

The developers envision the pod climbing like a mountain goat over huge chunks of soil – or in battle with hunter-gather machines, each beholden to their own physics-based walker animation.

“You’ve potentially got these two entities interacting where one could climb upon the other, and the weight change affects them,” McWilliams says. “There are all these things we haven’t got to yet.” 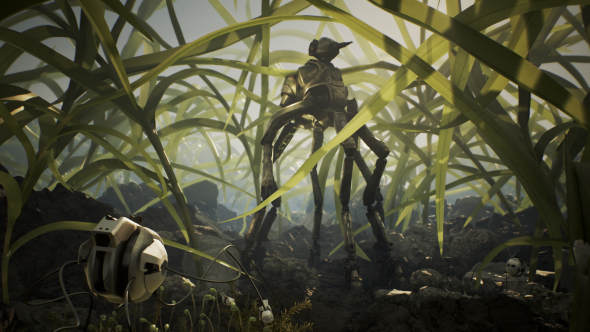 There’s still a long way to go, particularly since McWilliams is keen for the pod’s procedural animation to look and feel as fluid as possible. Grow Home, a Ubisoft Reflections game that experimented with similar technology, leaned into the natural clumsiness of the tech with a lovably uncoordinated robot protagonist. But Infinitesimals isn’t going the same route.

“It’s hard not to make it clumsy – it’s kind of inherent in trying something like this,” he says. “But what we’re working towards is making the pod precise, so that it doesn’t feel frustrating. You can use the clumsiness as a positive, but in this case where you’re trying to fight other machines and creatures, you need that level of precision.

“If it gets its leg blown off, you’re going to see it respond to that. But you want to feel like it’s doing a good job of responding to your inputs.”

More than once, the pod has reached the level of responsiveness the developers are aiming for – but it temporarily regresses each time the pair add another layer of complexity to its behaviour. Nevertheless, they’re now getting close to the point where they can proudly demo their six-legged baby.

“It’s been a long road,” McWilliams says. “I first started working on it in 2013. I welled up the first time I saw the pod walking around, I must admit. I’m not ashamed to admit that.”

Infinitesimals is in development for the PC. Unreal Engine 4 is now free.

In this sponsored series, we’re looking at how game developers are taking advantage of Unreal Engine 4 to create a new generation of PC games. With thanks to Epic Games and Cubit Studios.