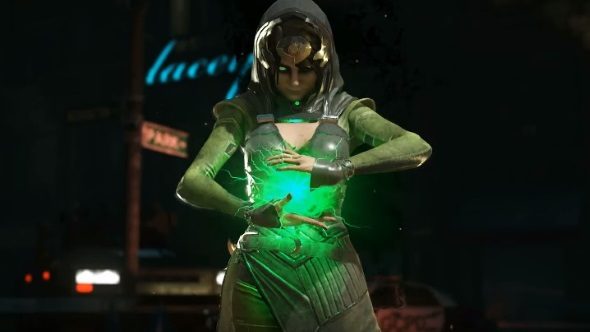 Among the many failings of Suicide Squad as a film was making Enchantress look like a scruffy goth hobo, more likely to be seen dumpster-diving than plotting world domination.

Fortunately, her upcoming debut as a DLC character in superhero fisticuffs spectacular Injustice 2 has restored her to her full glory, along with giving her a very distinctive fighting style, which you can take a peek at in the trailer within.

Times are changing, and fighting games have finally found their niche on PC. Injustice 2 isn’t on our list of the best games on PC right now, but there’s every chance it could find its way on there in the coming months.

Being a powerful and manipulative magic user, Enchantress doesn’t move around quite as much as other fighters, seemingly preferring a more defensive and reactive playstyle. She’s got a variety of projectile-reflecting shields, powerful parry-type attacks, traps, slow-moving summons to help her control the field and a few more tricks besides. It’ll be interesting to see how she stacks up against Swamp Thing, the other slow-mover of the game.

While Enchantress does have some movement based tricks – best used to put space between her and trouble, most likely – it seems that a lot of her attacks might come out a little slow, but have exceptional range, even on the melee-type spells. It already feels like the winning strategy with her is to keep cool and try and bait your opponent into your juicier set-up moves.

Enchantress will be launching as a solo DLC character on January 16th, but more likely you’ll want her as part of the third DLC character bundle, which includes the mechanically exciting Atom, as well as a certain squad of Heroes In A Half-Shell that you probably don’t want to go without.

Injustice 2 is available on Steam now for its usual £40/$60 RRP, although if you want all the DLC characters (including the upcoming Teenage Mutant Ninja Turtles, so of course you do), you might want to hold off for a discount, because the Ultimate edition of the game (including all the addons) is just a tad pricey right now.