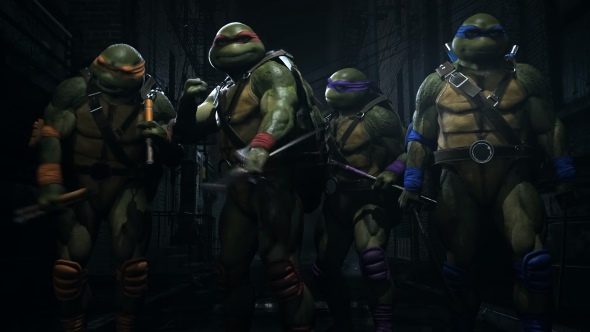 Batman v Superman v Sub Zero v Hellboy v Teenage Mutant Ninja Turtles. Admit it, you’d pay to see it. While Warner Bros’ film division hasn’t quite drummed up the courage for a crossover of that magnitude yet, Mortal Kombat studio NetherRealm are well ahead of the curve.

With a PC release due in just a few days, they’ve just announced the contents of the third and final planned DLC bundle for Injustice 2, their surprisingly great superhero fighting game, and it’s a gem. The Atom and Enchantress are good enough additions, but the boys are well and truly back in town now; lock up your pizzas, because the Turtles are here to play.

Times are a’changing. Feels we’re about due for some fighting games making their way onto our list of the best multiplayer titles on PC.

The reveal of the Turtles is a huge and pleasant surprise for many. There’s been some teasing that Spawn may be coming to the game, but I must say that I prefer this twist ending to the tale. Plus, the second bundle of characters brought Hellboy on board, and I’ll take him over mopey old Spawn any day of the week.

There’s no gameplay footage of the new characters in action yet, and no word yet on how the Turtles themselves will play. My guess is they’re most likely going to fill a single character slot on the roster. Raphael is going to lead the change (given his front-and-center role in the trailer), and the other turtles are likely to be represented as assist-type attacks, with the whole gang joining in for super-moves.

There’s the possibility that you could play as all of them through changing character model, but it seems unlikely. Even in the most dramatic of swaps (Superman to Bizarro for instance), the character skins so far are purely aesthetic changes, even if they do change how many moves look.

Injustice 2 is due out on PC this Tuesday, November 14th after a brief but successful bit of public beta testing. Given how great these DLC characters look, you might want to hold out for a deal on the Ultimate Edition of the game.