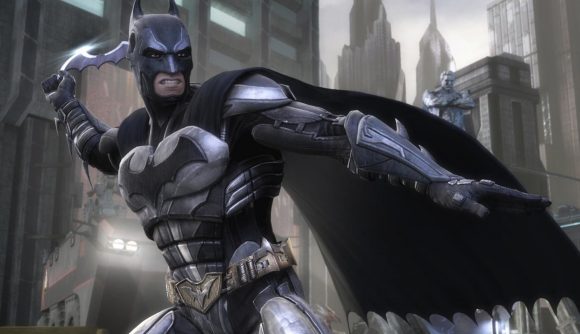 If you’re looking for some fighting games to start brawling in this weekend, NetherRealm and Warner Bros. have a heck of a deal. Injustice: Gods Among Us, 2013’s DC Comics fighter, is completely free – to keep – on Steam for a limited time. This is the Ultimate Edition with all the major DLC included, too, so you’re getting a heck of a package here.

You can head to the Steam page to pick up Injustice: Gods Among Us Ultimate Edition for free through June 25. While there’s a limited amount of time to claim the offer, the game will remain in your library forever once you’ve grabbed it. The promotion is also available on PlayStation 4 and Xbox 360 (backward compatible with X1), if you’d like digital copies for your console libraries, too.

Injustice takes the modern Mortal Kombat formula and applies it to the DC universe, with a roster encompassing everyone from Superman and Batman to Killer Frost and Black Adam. The Ultimate Edition of Injustice includes six additional characters – Batgirl, Lobo, Zod, Martian Manhunter, Zatanna, and MK’s Scorpion – as well as a host of additional skins and single-player STAR Labs missions.

There are more rumours than we can possibly recount here about the WB Games lineup, and there’s a part of me that hopes this freebie is part of a tease for something major – but the tweet announcing the giveaway simply suggests it’s part of a COVID-19-inspired ‘Play at Home’ promotion.

Be a hero while playing with friends and family. Injustice: Gods Among Us is available for free now on @Xbox, @PlayStation, and PC until June 25! #playathome #playtogether pic.twitter.com/8KP8nOJC9D

If you’re looking for more free PC games, you can follow that link for a big list of stuff worth checking out.