It is often said that that anybody can make a game these days with only a PC, a free engine, and possibly a piece of string. But it is still rare to meet an actual solo developer in the wild – no freelance animator, no friend helping out with the music. Just one person doing absolutely everything.

Read more: the most horrifying horror games on the PC.

But that’s David Andreasian, the man behind first-person horror game Inmates. The only help he did have is from Iceberg Interactive, who published Inmates on Steam last week. I got in touch to find out how on earth David did, well, everything else.

Andreasian, who lives in the Armenian capital of Yerevan, has worked as a 3D artist for over 15 years. But he is no programmer. That fact was a key factor in his decision to make Inmates using Unreal Engine 4.

“You must have skills in programming [to use] other engines,” he says. “But Blueprint gives you a chance to make a game without any skills in C++ or other programming tools.”

Blueprint is Unreal Engine 4’s simplified scripting tool – a node-based interface used to create gameplay elements without leaving the engine’s editor. Triple-A developers use it to prototype their ideas quickly, while smaller developers without access to a pit of programmers can build and ship entire games in Blueprint. Games that, otherwise, might never be made.

“Of course, making a game in itself, no matter what type of game, is a huge project, especially if you’re doing it on your own,” Iceberg product manager Bart Schouten tells us. “The biggest trap people fall in while developing is being overly ambitious, trying to do everything, and creating a much bigger game than is actually feasible with limited resources.”

Inmates is designed to be three to four hours long – a constraint that has ensured it could actually be finished.

“That’s one of the things that David has managed really well,” Schouten says. “To keep the scope of the game small enough to be a realisable project.”

A fistful of Fincher 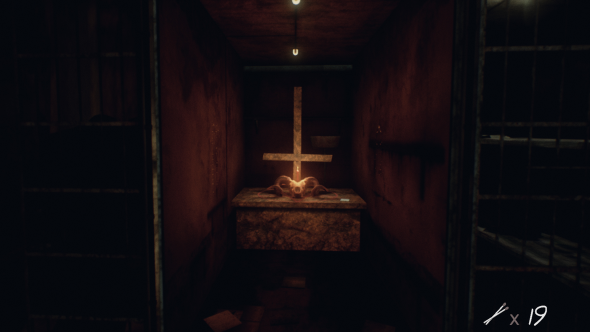 The lighting in Inmates is not so much striking as seeping – a pervasive yellowish gloom that threatens to drip through the screen.

“The main reference is Se7en, David Fincher’s movie,” Andreasian explains. “I think it’s very artistic and good-looking. So my approach is to make it look like that style of lighting, but on Realistic Mode.”

The second important decision Andreasian made in regard to Inmates’ lighting was not to rely on global illumination. That’s the powerful lighting solution that calculates the effects of light being bounced, reflected, absorbed, and scattered across its surroundings in real-time.

Why would you not want that? Global illumination can be extremely performance intensive, and Andreasian knew his limited abilities in optimisation would not be up to the task. Instead, he opted to ‘bake’ his lights into Inmates’ levels. That way, complex lighting is pre-calculated long before any player arrives, so that the game can mimic the effects without having to compute them while the game is running.

For the final touches, Andreasian turned on a number of “post-production gizmos,” which contribute to the overall gloom of Inmates’ prison scenes.

“If I turn off my post-production gizmos it is a very happy place,” he laughs. 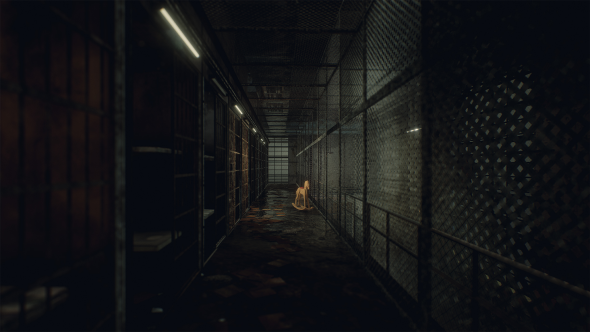 As in most decent horror stories, Inmates’ most memorable scenes happen inside the head of its protagonist. One particular moment that sticks in the mind takes place in a twisting, chequered corridor that curves impossibly ahead of you – an image straight out of Alice in Wonderland.

Its creation was deceptively simple: Andreasian built the hallway in parts, before using a specialised tool to modify its shape.

“I modelled it as a normal corridor,” he says. “And then in the final stage I just twisted it.”

Another surrealist environment Andreasian is proud of is the “four-dimensional library” – a level comparable to one of Interstellar’s closing scenes. 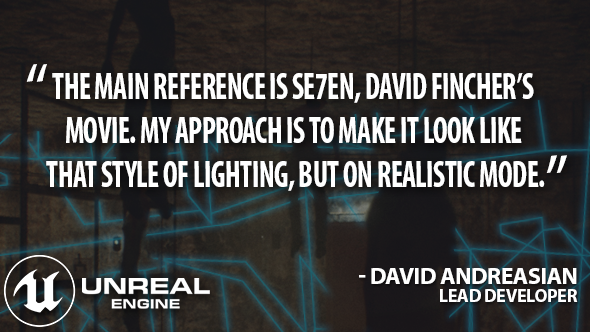 “Essentially, if you look down you see the floor of the library, and if you look left you see the same library mirrored,” Schouten explains. “So, everywhere you look, you have the same type of environment. We call these subconscious areas – they are a psychological part of the game, and that is what allowed David to go really go loose with all the tools that he has available, to make these really psychedelic environments.”

Looking back on Inmates’ development, it seems that Andreasian’s greatest strength is that he has not used all of the tools made available to him – instead picking and choosing, mindful of his own skills and ability to see Inmates through to the end.

“When I look now at the game it’s very different from the one I sent Iceberg Interactive five months ago,” he concludes. “For me, I’m proud I finished it and the quality is pretty good. It’s hard to make a game like this alone.”

Inmates is available on Steam. Unreal Engine 4 is now free.

In this sponsored series, we’re looking at how game developers are taking advantage of Unreal Engine 4 to create a new generation of PC games. With thanks to Epic Games, David Andreasian, and Iceberg Interactive.