Insurgency has always wanted to make war hell. As a mod in 2007, it was a hectic, ‘realistic’ alternative to clean and sportsmanlike Counter-Strike firefights. As a standalone release in 2014, it offered the screaming shrapnel of war for those tired of Call of Duty’s badass bravado. The new Insurgency: Sandstorm is this grizzled veteran’s chance to prove it’s still got it – but while its aim might be as good as ever, the old soldier’s knees are starting to give way.

This is especially a shame given the series’ push for accessibility. While Counter-Strike’s take on contemporary combat turned urban warfare into a complex esport, Insurgency removed as many roadblocks as possible between the player and the brutal reality of dusty block-by-block firefights in a Middle-Eastern war.

It’s a familiar setup. Two teams, Security and Insurgents, face off against each other in a variety of standard city streets and industrial sprawl. There are a number of classes and loadout options, all built around a resource called ‘Supply’ – used to purchase either sidearms and grenades, or trick out weapons with a range of gadgets and gizmos.

Those classes range from simple riflemen to the usual close-quarters experts and long-range marksmen. But then there are less conventional roles, like the Commander and Observers, who can coordinate with each other to call in devastating fire support. Each has a belt full of tools to pull from, with equipment switching up based on which team you’re landed on.

All that complexity is stripped back once the menus close, however, and being the hardened vet it is, Sandstorm is very careful about what information it gives you. With no map, no hitmarkers, and no killfeed, vital information on the enemy is kept thrillingly hidden. Granular mechanics like variable reload types, leaning, kicking, opening doors, and dropping prone give you enough options to evade a devastating time-to-kill. 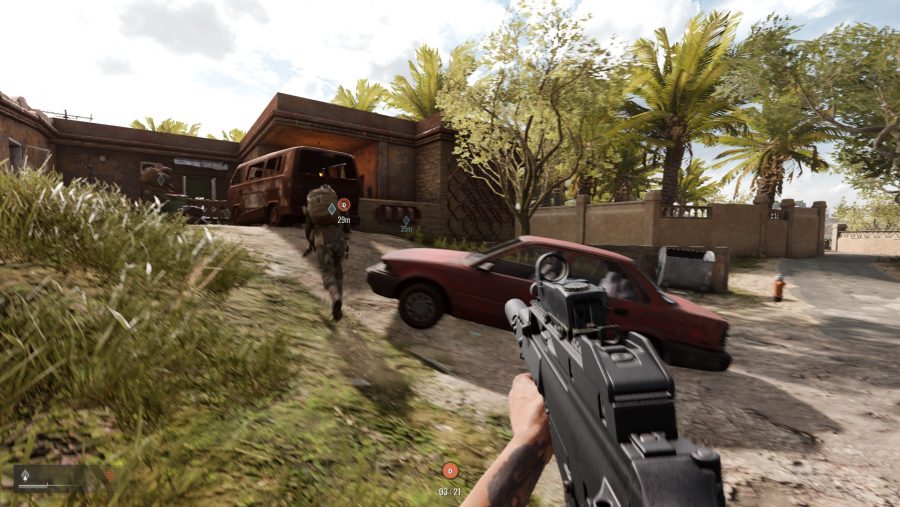 Don’t be mistaken – Insurgency: Sandstorm isn’t Arma. There isn’t an overly detailed web of commands and keys to help you pick from 14 varieties of crouching. Sandstorm manages to eschew just enough of its gaminess to capture the panic and misinformation of urban warfare – without feeling unwieldy. Shouts and screams from friends and foe pierce the air, as the impacts of nearby shots leave your ears ringing and aim unsteady.

as a multiplayer shooter, it raises imagery without ever questioning it

A round of Sandstorm feels chaotic but controllable. Steady nerves and steadier aim will get you through a match, while low hit points urge patience and communication. There’s a lengthy wait to get back into the fight – at best, respawns are timed in waves, but most modes won’t let you jump in again unless your team capture an objective. It’s a great introduction to tense, tactical first-person firefights without too punishing a learning curve.

This has always been Insurgency’s bread and butter, first baked in its days as a mod and seasoned for the 2014 standalone Source engine release. Sandstorm’s goal as a sequel, then, is to make things bigger and better. Some classes can now coordinate to call in airstrikes and helicopter attacks, while lengthy co-op maps flaunt drivable vehicles. Sandstorm also features competitive matchmaking, but it’s been locked off until launch. What’s been playable up ‘til now is a fairly light selection of maps, across some fairly similar point-control game types. 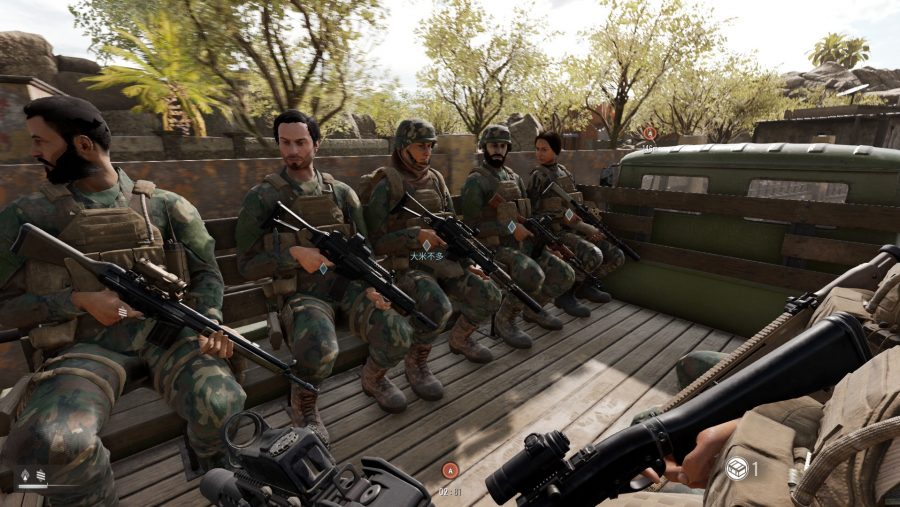 Sandstorm’s place as a sequel is muddied, however, by the notable omission of an anticipated campaign mode – which follows two Iraqi women crossing a war-torn land – the developer cut in order to ship this year. In 2018, the gruff military story is well and truly worn thin, so it’s a shame to miss out on a potentially refreshing perspective.

Sandstorm offers a ludicrous number of gun customisation options, featuring dozens of scopes, foregrips, silencers, extended magazines, and laser pointers. Each costs a set amount of Supply, but so do sidearms and grenades. Dying for a 4x scope? Think about sacrificing a couple of smokes or a pistol.

That twist on a traditional military story might have also lent the game a unique character – something Sandstorm is profoundly lacking currently. By fictionalising its Middle-Eastern war, developer New World Interactive trades in tropes we’re all too familiar with. The sandswept rural villages and city sprawls you visit could be any from half a dozen Call of Duty games. Sandstorm gives us nameless locations with nameless conflicts.

This aesthetic felt excusable when Insurgency was a mod over a decade ago. But we’ve largely moved on, and there’s something rather uncomfortable about rendering a suicide bombing with the power of Unreal Engine 4. A campaign could have given Insurgency the option to say something about an extremely controversial real-world war – but as a multiplayer shooter, it raises imagery without ever questioning it. 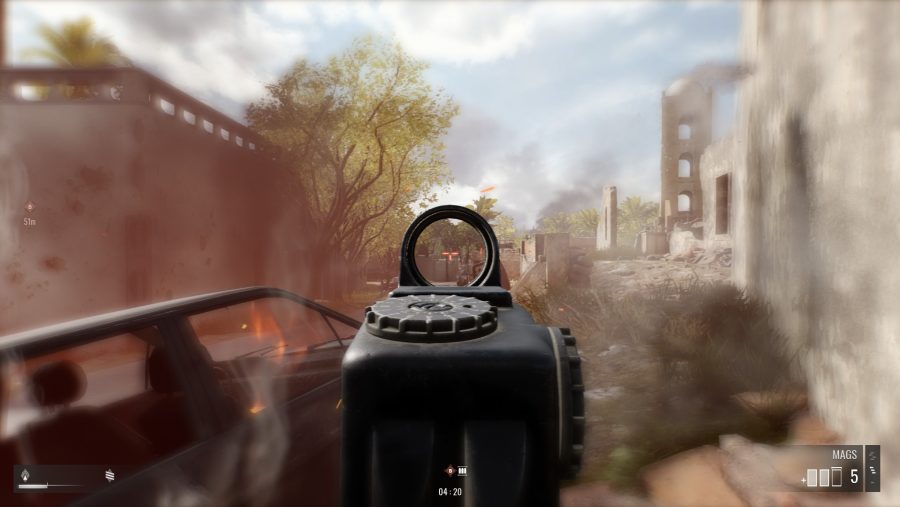 In Sandstorm’s defence, player avatars tend more towards local guns rather than Western interventionists. Women feature in Security character customisation, which gives dozens of little unlockable options to dress up your toy soldier. There’s a surprising wealth of cosmetics, unlocked through a currency gained via levelling up.

While single-player might be missing, Sandstorm’s co-op offering manages to outshine the PvP modes. As a team of eight pushes through city streets and factory backlots, coordination feels vital – you’re teaming spotters with commanders and holding checkpoints against enemy counter-attacks.

Sandstorm is often nicely drawn on-screen, but its sandswept refineries and streets rarely pop. As a budget alternative to the annual Call of Duties or Battlefields, a minor visual downgrade isn’t a big deal – particularly when Sandstorm is offering a distinct alternative to big-budget gameplay. But becomes unacceptable when those lower visual standards are met by technical problems.

I’ve encountered nothing game-breaking to speak of, but Sandstorm often struggles to keep up with its own ambitions. Texture pop-in is rife on loading maps, while first-person gun models often taking a good minute to load in. 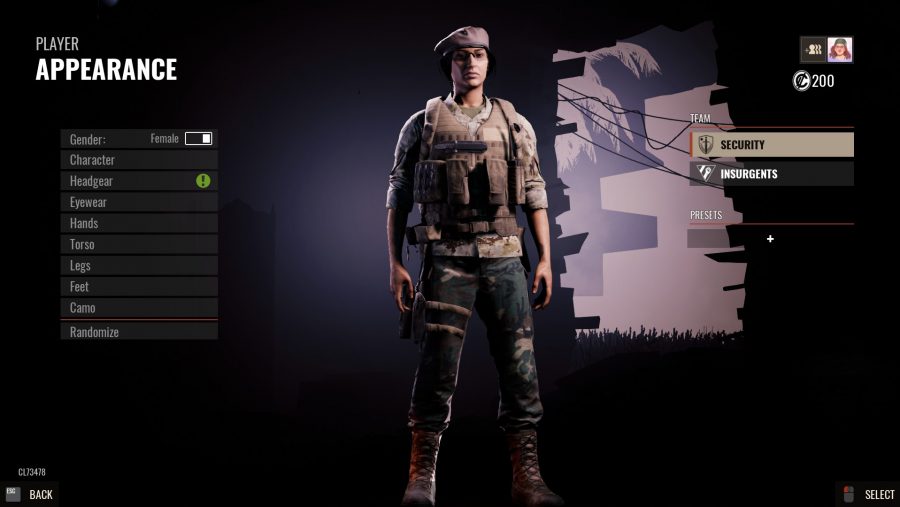 All in all, Sandstorm often feels more like an Insurgency ‘definitive edition’ than a sequel. It’s more of the same close-quarters combat over small dusty maps, given a modest degree of visual flair and deeper customisation.

That said, despite its creaky bones, I don’t doubt Insurgency: Sandstorm will keep a dedicated community for months to come. Progression systems and competitive ladders hint at a desire to keep players coming back for more. New World is also promising mod support and custom servers, which are welcome features that have become increasingly uncommon in multiplayer games.

Insurgency has secured a unique space as a realistic shooter without slipping into simulation territory, and Sandstorm is good enough that it can continue to trade on that – uncomfortable imagery and all.

A solid shooter that offers the series’ best intense, tactical thrills, but can’t help but feel behind the times in both theme and looks.