Intel’s pricing has been fairly consistent across generations in the past, but processor core counts have seen little to no change for quite some time. But now Intel have to square up against strong offerings in both pricing and core counts from AMD’s Ryzen 7, 5, and 3 chips – with the Ryzen 5 1600X already sitting at the top of our best CPU for gaming list, having usurped their Kaby Lake Core i5. With the introduction of six-core processors to the Intel mainstream lineup, the big question is: will Intel be giving away those extra two cores for free?

Tech retailer LambdaTek have listed the entire Intel 8th generation processors on their German online store. Pricing indicates a similar price point at launch compared to the last generation Kaby Lake chips, although prices have fallen considerably for 7th-generation chips since they were released .

Intel’s flagship i7-8700K is expected to launch at €388, compared to the i7-7700K that launched on Amazon.de at nearly the exact same price. The i5-8600K is listed at €273, which is slightly higher than the original launch price of the i5-7600K at €266 on Amazon.de. The i3-8350K is supposedly launching at €189, which is again within a similar price range of the last generation i3-7350K, although pricing for this processor has fluctuated vastly since launch. The same pricing trend also applies to the three non K-series chips. 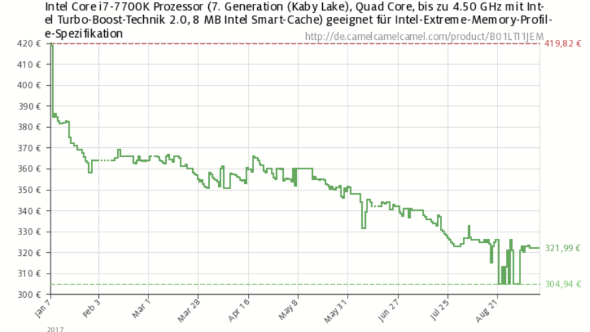 While pricing may vary by country, the general trend of retaining the same essential pricing structure for Coffee Lake as Kaby Lake should carry over through all Intel’s global markets. That means we ought to expect the 8700K to be released at around the $360 (£360) mark and the 8600K launching at around $260 (£260).

Coffee Lake is shaping up to possibly offer something drastically new to Intel’s mainstream chips, and Intel will be hoping to tempt users running Haswell architecture and below into picking up the latest six-core chips. As with all new processor generations, we may see fluctuations in pricing when demand is high, especially at launch, and Coffee Lake is expected to be some highly sought after silicon.

Due to the revitalisation of AMD’s CPU business, Intel have been put under pressure by a competitor for the first time in years. AMD are offering double the cores over Intel’s Kaby Lake processor lineup, without doubling the price. Intel, however, will point to the fact they offer strong single-core performance compared to AMD’s Ryzen. Whether strong single-core performance will be the tipping point toward the blue team for gamers relies largely on Intel’s continuation of current price points.

It seems Intel may have stuck to their guns and retained pricing across Coffee Lake desktop processors compared to their Kaby Lake counterparts. If these price points do indeed continue across global channels, then Intel’s Coffee Lake is going to be very dangerous to AMD’s new-found success with Ryzen.