Due to some rule breaking by those who shall not be named, Intel have let loose the details on their latest Core 8th generation processors a little earlier than planned, confirming the first ever six-core i5s and four-core i3s from Intel to be on their way for an October 5th release.

Make sure you are getting the best out of your new processor with the best SSD for gaming.

Intel have finally confirmed what has been suspected through leaks and rumours for quite some time regarding their upcoming 8th-generation processors. Unfortunately, reviews are still under wraps until October 5th, so we won’t have the complete picture until that date – at least not without another embargo maverick on the loose.

Intel are promising big performance increases with Coffee Lake, especially in multi-threaded performance. They confirmed a 25% increase in fps, 32% faster 4K video editing, and 45% better mega-tasking between the i7 7700K and Intel’s, self-proclaimed, ‘best gaming processor ever’, the i7 8700K.

Multi-threaded performance increases against the 7th gen are largely due to Intel finally deciding to do away with the four-core standard on their mainstream processors introduced many moons ago, and moving up to six-cores for the 8th gen. 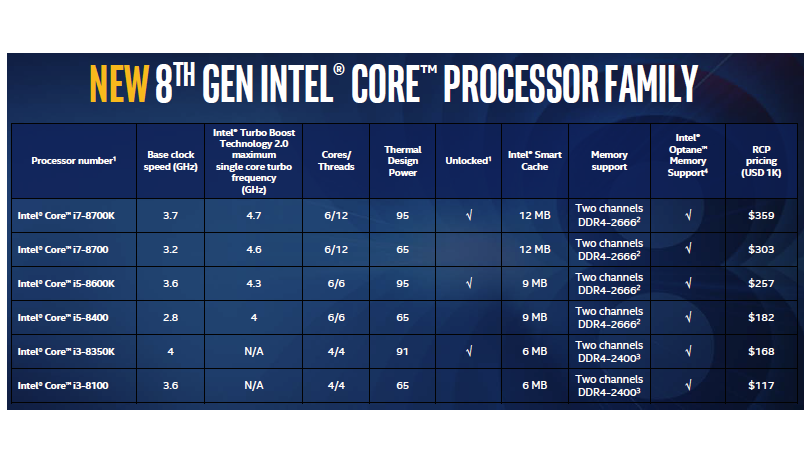 Also two six-core processors, both without hyperthreading, will occupy the i5 lineup. The i5 8600K features a 3.6 GHz base and 4.3GHz boost. The 8400 has a much lower base clock of 2.8GHz, however still boosts to 4GHz on a single core.

Alongside Intel’s latest hexa-core processors is the launch of Intel’s first ever four-core i3 processors – the 8350K and 8100. The i3 8350K is shaping up to be an impressive chip for gamers, now confirmed at $168. The only caveat to the i3 taking the gaming crown will be the $14 required to upgrade to the i5 8400, a six-core/six-thread processor.

The 8350K will offer more than enough performance thanks to its 4GHz base clock, although how this will stack up against two more cores will be the real decider, which we will have to wait for benchmarks to confirm. The two extra cores on the i5 8400 will help with multithreaded performance, however, the 8350K runs a much higher base clock at 4GHz, which should aid massively in gaming performance. 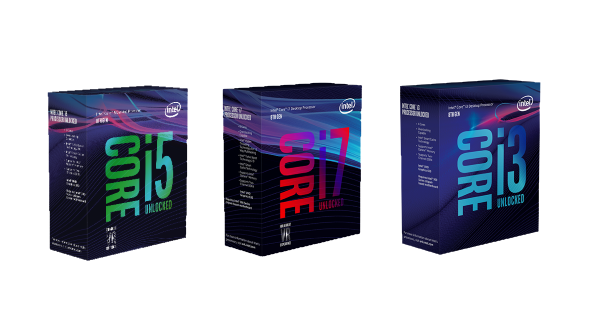 Pricing has been a big sticking point for the rumour mill, and AMD backed Intel into a corner with Ryzen’s higher core counts. Good news for gamers, and seemingly out of necessity, Intel have confirmed only small increases to pricing on their unlocked K-series i5 and i7 chips of $14 and $9, respectively. Non-K-series and i3 processors have retained the exact same recommended pricing as their 7th gen counterparts.

Intel have managed to keep increases to the TDP of Coffee Lake processors to a minimum despite the increase in core counts across the board. The lower base clocks compared to Kaby Lake chips is likely a symptom of Intel’s TDP-saving efforts.

Elsewhere, Intel have increased memory speed support on their i5 and i7 desktop processors, with DDR4-2666 now supported. i3’s will continue to support 2400Mhz memory.

Unfortunately, the latest Z370 boards will be required for use with Coffee Lake chips, as they will not feature any backwards-compatibility with older boards. Budget builders may be a little stuck for the time being, with budget-minded chipsets not likely arriving till next year.

Despite the lack of backwards compatibility, the Z370 features are largely unchanged. The chipset continues to offer 24 PCIe lanes alongside the CPUs 16 provided lanes for a total of 40 PCIe lanes for the platform. Intel do however tout improved power delivery and memory routing on the latest chipset, aiding in overclocking capability.

Reviews and benchmarking are still under wraps until October 5th, at which point we will see just how much of an impact Intel’s next generation is going to have on the mainstream processor market, and AMD’s Ryzen sales.