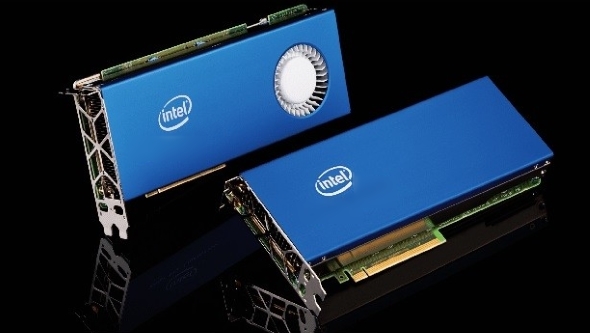 Intel have debut some new GPU-adjacent designs at the International Solid-State Circuits Conference (or ISSCC for short), but before you get too excited this announcement isn’t the result of Intel’s new graphics division condensing years of work into only a few months, it’s purely an unrelated research project on GPU power efficiency.

Intel have plenty of competition for high-end GPUs. Here are the best graphics cards around.

Intel are expected to one day put together some form of discrete GPU since they acquired AMD’s top GPU-mind. Raja Koduri may have joined Intel to head up the newly-formed Core and Visual Computing Group, but even for an experienced GPU architect, three months on the job may be asking a little much to prototype an entire functioning GPU architecture.

The announcement from ISSCC came via PCWatch, who rightfully reported that this prototype GPU isn’t going to be on the market as a standalone product anytime soon. The design is built upon the 14nm fabrication process, and features largely the same technology that Intel currently utilised within their current iGPU designs. At 1.2V, the GPU would reach a blistering speed of… 400MHz.

You can take a look at the prototype GPU schematicsright hereif you like intense block diagrams.

The chip’s function, however, wasn’t to unleash this underwhelming iGPU-fueled graphics power on the unsuspecting world. No, it was actually meant to show greater granular voltage control and power efficiency applied to a GPU, leading to greater power efficiency for their own iGPU chips.

Intel still have a long way to go with any discrete GPU products, and that’s probably a good thing – we don’t want another Larrabee, after all. The GPU design published at ISSCC is pretty low-power and low-performance, and I don’t know about you, but I’d hope that when Intel do launch a discrete graphics product it packs a little more punch than this.

When Intel do announce their own discrete GPU – however far away that may be – I imagine they would see fit to organise their own event to do so, rather than let slip their entire design at an electrical engineering conference in San Fran.