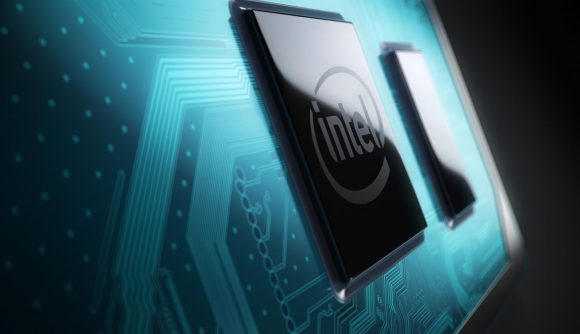 It’s finally happening, folks. Intel is absolutely, 100% leaving the long-toothed 14nm process node for greener, or rather denser, pastures. Intel has arrived at Computex full of gusto and has previewed its mobile Ice Lake processors ahead of its keynote on May 28 at Computex, which I’m sure has nothing to do with AMD’s upcoming Computex keynote.

Yes that’s just mobile chips for now. Avid desktop gamers will have to wait a little (or a lot) longer to get their hands on 10nm processors. But that doesn’t mean all is lost for us lot, Intel still has a few new tricks to keep on-the-go gamers on the hook for a little longer. And maybe even a glimpse of what to expect from Sunny Cove once it finally makes its way to desktop.

The company’s own internal benchmarks put an undisclosed Gen 11 iGPU – presumably the top chip – capable of “nearly double” the performance of previous Gen 9 graphics (Intel Core i7 8565U) in CS:GO, Rainbow Six:Siege, and Total War: Three Kingdoms. Intel’s footnotes show that all three games were running at 1080p at either low or medium settings.

Want more? These are the best CPUs for gaming so far in 2019

Intel’s system benchmarks also indicate that we can expect at least up to four-core/eight-thread chips running at 15W with Ice Lake U-series chips.

Intel Ice Lake processors will be the first to ditch the Skylake architecture, which has been utilised in some form – whether that be Skylake, Kaby Lake, or Coffee Lake – since the 6th Gen. Instead, these chips will utilise the Sunny Cove architecture announced back at Intel’s Architecture Day.

Aside from just the 10nm process node, Sunny Cove also brings with it Intel’s Deep Learning Boost and integrated neural accelerator. All that AI smarts, Intel says, will come in use for tasks such as image deblur or stylising video and “usher in a new era of intelligent performance for PCs.”

Intel is remaining a little light on the details for now, but we’re sure to find out more from Ice Lake and whatever else Intel has in store to take on AMD over at the Intel Industry Keynote on May 28. Stay tuned for all the details.