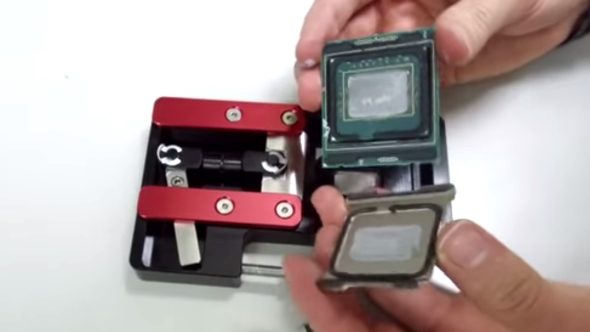 It looks like overclocking Intel’s Skylake-X and Kaby Lake CPUs is going to be more than a little irritating, as unsoldered chips and a basic thermal compound will bump the running temperatures up significantly.

Seems as though Skylake-X might not be the answer to your overclocking needs, but which CPU is? Find out in our guide to the best gaming CPUs.

Overclocker der8auer posted a video yesterday of him delidding a six-core Skylake-X CPU and discussing some of the issues the X299 chips have.

It would seem Intel are still attempting to save money in the manufacture of the new CPUs by opting not to solder the CPU to the CPU’s integrated heat spreader (IHS). Instead, they’ve chosen to make use of a thermal interface material (TIM), which has inferior thermal conductivity to a soldered chip.

This can cause heat problems – especially when overclocking. Given this is the first time Intel won’t be using a soldered IHS for one of their high-end desktop platforms, blue team fans are up in arms about a decision that seems to have been motivated by the cost and convenience of manufacturing rather than customer satisfaction. Which is particularly galling given the fact that five of the Skylake-X chips are retailing for between $999 and $1,999. Cheap chips they ain’t.

It should go without saying that delidding would also void the warranty on the chip, not to mention the unholy amounts of damage a botched attempt can do to the internals.

Asus confirmed to us the news of X299 chips’ lack of solder is indeed true. We spoke to one of their reps during their motherboard workshop at Computex yesterday about the overclocking potential of a delidded Skylake-X CPU. They’ve been seeing a 30°C drop in temperatures by popping the top on the chip and using a liquid metal thermal interface.

He went on to explain Skylake-X shares the same issue as Kaby Lake – temperatures rise at lightning speed when upping the voltage going into the processor, meaning 1.3V of power is roughly the maximum amount of juice you’ll want to pump into it without serious cooling. The Asus team did manage to get 4.3GHz out of the ten-core 7900X with 1.25V of power though, so the chips will still be pretty capable even at default voltages.

Has this news put you off the upcoming Skylake-X and Kaby Lake-X chips?