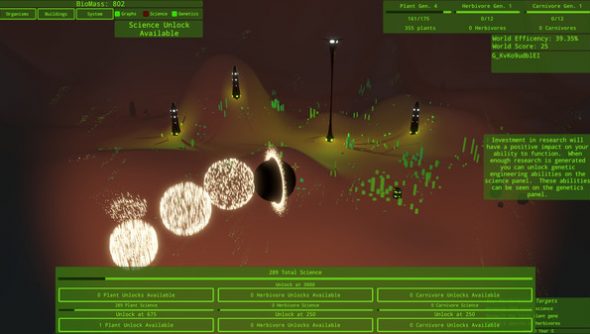 You might not have heard of Intelligent Design: An Evolutionary Sandbox, but those who have heard of it are struggling to crack it open. In fact, its final achievement still hasn’t been unlocked, almost two months on from release.

For more small studio gems, check out our list of the best indie games.

The game is an evolutionary sandbox, in which the player has to nurture an ecosystem, all under the watchful eyes of a faceless corporation (faceless, not eyeless, alright?).

Temperature, wind, and the climate affect your efforts, as do the genetics of the organisms that flourish in this environment. The game boasts a fully simulated evolutionary cycle, with no trickery.

“As soon as one of you guys has unlocked the final achievement ‘Code Breaker’ and can explain all the steps needed to solve it I will release the AI source code,” developer Sean Walton says.

“I’ve been inspired by watching you all set up experiments and test hypotheses to try and work out what each gene does. You have been doing all that by looking at the behaviours and appearances of the organisms. Having the source code will be like doing a dissection.”

Saying that, Walton adds the caveat that, while he wrote the source code, even he doesn’t know what the perfect organism is. It’s a xenomorph, Sean. Everyone knows that.

Intelligent Design: An Evolutionary Sandbox is currently $5.59 in the Steam sale, if you fancy it. See it in action in the video above.