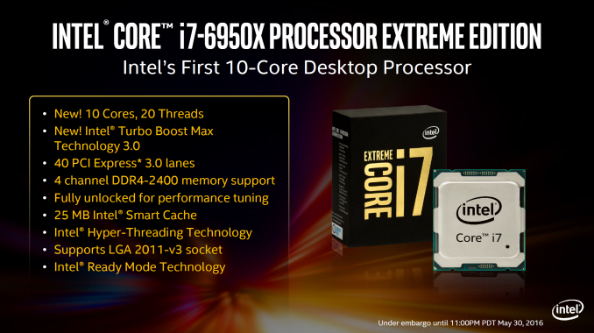 Time was, he says chewing on some wheat and looking off into the horizon, you’d pay about $999 for whatever top-end desktop CPU Intel were flogging. Also, all of this was all just fields. This week the established pricing goes out of the window as Intel’s Core i7 6950X chip goes on sale for $1749/£1399, offering a 10-core, 20-thread behemoth of a CPU. But let’s not call up our loan sharks quite yet, because the 6950X and its new Broadwell-E stablemates don’t transform gaming performances as one might expect for the price. They’re high-end desktop user products, sure, but as is becoming clear with each benchmark and review, the dollars don’t translate to higher frame rates.

Like to make your hardware suffer, do you? Well, the best VR games for PC will make a PCB sweat like nothing else.

Anandtech, who are among the first to review the 6950X and its three Broadwell-E brethren, have concluded that none of these new CPUs makes sense to the gamer: “Even just looking at the specification sheet, for anyone currently on a modern HEDT system it would be hard to see the value of investing in Broadwell-E unless peak performance is required at any cost.”

There are a few features on that aforementioned spec sheet that might catch the gamer’s eye, though. Chief of those is a higher supported DDR4 memory speed, up to 2400MHz. That reasonably conservative figure means memory manufacturers can push the envelope to speeds way beyond it. G.Skill and Corsair already offer 3400MHz kits, for example.

But look through the gaming benchmark results from Anandtech’s review and you’ll see all Broadwell-E CPUs, from the cheapest Core i7 6800K up to that top-end 6950X, are frequently outperformed by $200-$300 processors. Not by twenty frames per second or anything – these are processors we’re talking about, so they’re never going to have as dramatic an impact on fps as graphics cards – but enough to question where your money is going.

The bottom line seems to be that Broadwell-E is for those who need compute performance at any cost. As gamers we’re drawn to the most expensive of everything, particularly when it’s dressed up in black and gold packaging like the 6950X is. Particularly when it boasts ridiculous spec sheet numbers. But Broadwell-E doesn’t appear to have been conceived for PC gamers. Move along.