TPS, PvE, PvP and WTF. Nobody enjoys a three-letter acronym better than an MMO publisher like Infernum – and the way they describe it, Zombies Monsters Robots (known by the entirely different title of Hazard Ops in Europe, go figure) is full of them. This third-person shooter collects together practically every mode the genre has ever known.

There’s more to it than that, though. With a little unpacking, it becomes clear why the Germans who bankrolled Dragon’s Prophet are interested in this self-consciously silly Shanghai import.

Built by a studio formerly known as Epic Games China, Zombies Monsters Robots wants to be your go-to Steam game to play with friends – a cutscene-light, intensely cooperative alternative to raid night.

“Even though it’s a TPS, there are some MMO aspects in terms of fighting bosses that require their own unique tactics,” said country manager Lee Dale. “It’s not just, ‘Stand behind cover and shoot them’. Each one is unique and it still has that sort of MMO aspect that we really love and what we’re known for publishing.”

Infernum are known, in short, for Dragon’s Prophet – the classical fantasy MMO which wore its values on its storefront when it made legendary Everquest raid boss Nagafen available as a pet last year.

But the Berlin publisher’s licensing team spend the year browsing all sorts of games in need of distributors – and found their raid preparation skills easily transferable to Zombies Monsters Robots’ cooldown-free environment.

What Yingpei Games have built, intentionally or not, is the ideal downtime-killer for MMO addicts – a tactically-varied online game which speaks in a common language – well-aimed guns – and doesn’t care whether or not you are your friends are the same level.

“For quite a long time I’ve been talking to a good buddy of mine and trying to find an actual good cooperative game, quite hardcore, [with] different missions we have to solve and some kind of progression into it,” said Infernum director of product management Kristian Metzger. “That’s what this game basically is.”

“We really like the idea of the Gears of War Horde Mode, everyone [with] a common goal,” added Dale. “There’s no worry about whether you’re competitively viable or anything like that because you’re all working together and that’s all that matters.”

Hazard Ops cuts its players loose of another concern, too – the serious story chops that have helped Uncharted and Spec Ops: The Line become household names, but have also left third-person shooting a more solemn place for their cutscene handwringing. 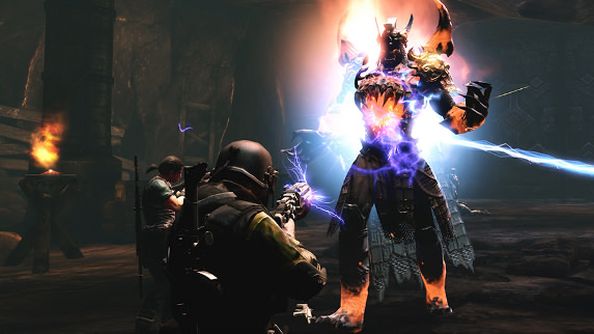 Yingpei’s debut might be the dinosaur-fuelled antidote to post-Drake protagonists – the action heroes who takes breaks from killing hundreds to fret over unconscious museum guards.

“Uncharted wants to be serious, wants to pull you into some kind of story mode and feel familiar with all the characters,” said Metzger. “That’s absolutely okay and something players out there definitely want. But also, we’re one hundred percent sure of this type of game – fun in just the pure way, not taking itself too seriously, but not afraid to go all the way.”

Yingpei have taken care not to punctuate their campaign poorly with cutscenes – or anything that might interrupt the flow of a co-op squad’s umpteenth attempt at a level.

“There are certainly cutscenes in there, but it’s merely to highlight the next point in the mission,” explained Dale. “There is an overarching story [involving villains-of-the-moment PMCs and a generous helping of House of the Dead shlock horror], like with any online game. But it’s not in-your-face. It lets you develop [through] the content yourself.” 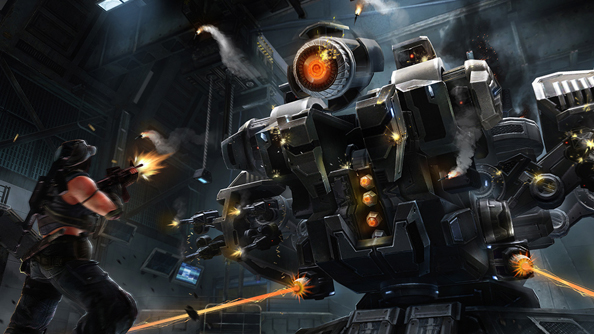 Infernum’s publishing team knew they were onto something when they first walking the railroads. Lee and a squad of colleagues had just cleared an area of enemies in an internal playtest, and proceeded cautiously down the tracks that Yingpei had laid in one of its levels.

“One of our guys said, ‘It would be awesome if like something would happen here’,” recalled Lee. “And as he looks around a train heads towards him, hits him and destroys him, and everybody’s just looking at him like, ‘Crap!’.”

In the example Lee cites, players are forced to dive into crevices to avoid frequent passing trains – all the while dodging the “mutant bombs” thrown by nearby zombies.

“If they hit you they blur your vision, so when you do run, you’re covered in this green goo and you get hit by a train,” laughed Lee. “It took me quite a long while to get past that, I will say.”

Infernum enthusiastically describe blade traps and insta-crushing boulders – markers of some tricky and intricate level design that smacks of Dark Souls. Hazard Ops will reward timing and persistence – and a grudging acceptance that you’re not going to know how to tackle its challenges on your first try. 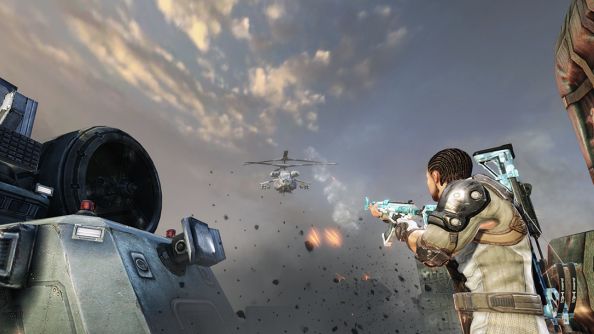 “There’s an ‘expect the unexpected’ aspect to it, especially with the environmental stuff,” said Lee. “The traps are really different and depending on your party size. You’re really going to have to work together, because not all of them can be turned off. Everyone will have to go past, go through.”

“Sometimes it feels a little like the good old Counter-Strike games where one really has to make sure that the other makes it through,” added Metzger.

There’s competitive multiplayer too, and Infernum say there’ll be at least 10 different modes ready for European release later in the summer. They’ll include deathmatch, team deathmatch, an intriguing tower defence twist on Call of Duty’s Zombies mode – and“basically everything” Gears has taught us to expect.

Expensively-made third-person shooters have taught us to expect a lot. But between a no-nonsense cooperative dynamic and some cunningly-shaped environments, Hazard Ops makes a compelling case for its existence in a well-watered field.