It’s hard to tell exactly when today’s retro FPS renaissance started, but we’re glad it’s here. Dusk and Amid Evil are two of the best games released in the past 12 months, and the Quake 1 engine-powered Wrath: Aeon of Ruin looks excellent, but Ion Fury is possibly the most intriguing of the lot.

The game previously known as Ion Maiden – before a surprisingly litigious metal band’s lawyers stepped in – is powered by Duke Nukem 3D’s Build engine, so it should feel antiquated. And yet Ion Fury not only reminds us why FPSs from the ‘90s were so much fun – it also gives more recent shooters a run for their money.

Ion Fury is actually a prequel to 2016 isometric shooter Bombshell, but no one cares about that. The story involves mad scientist Dr Heskel leading his cybernetic army onto the streets of Blade Runner-esque future Washington DC, and that’s pretty much all you need to know. The good doctor will taunt you from time to time, but otherwise the plot takes a back seat to the shooting.

And what glorious shooting it is. Developer Voidpoint is clearly aware of the rules when it comes to making a great FPS, and smashes them all – starting with the weapons. An FPS like this needs guns that are satisfyingly meaty, slightly ridiculous, and make pleasing ‘boom’ sounds. Ion Fury ticks these boxes with an armoury that includes a chaingun, a bow, homing grenades, proximity mines, and a shotgun/grenade launcher hybrid. Boom! Most importantly, all the guns are useful in different ways, with handy alternate-fire modes too – even the basic revolver remains a key part of your arsenal throughout the game. 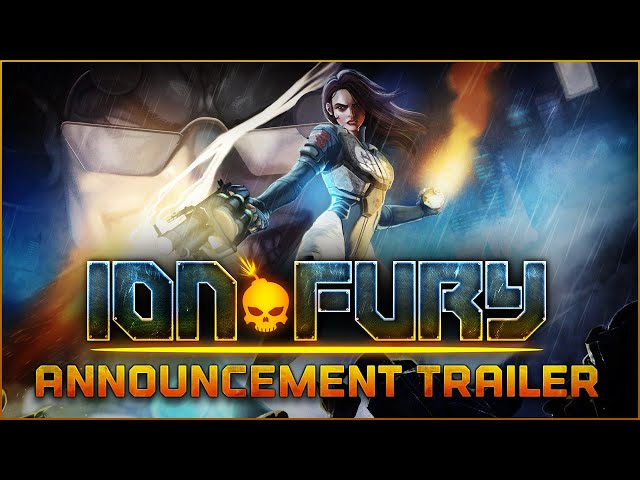 This is thanks in part to the excellent enemy design. Your foes are never bullet sponges – a few decent headshots with the pistol will bring down all but the hardiest. They’re all satisfying to fight, and demand different tactics both to engage and evade (you’ll be doing a lot of the latter, as enemies can ambush you by attacking from above or below). A shotgun to the face will do for regular soldiers or those creepy skull-spiders, but it’s pretty useless against the acid-spitting metal centipedes. Yes, they’re as barmy as they sound, and this serves not only to add flavour but information: the designs are good enough that you can recognise every enemy from a mile away.

If you Build it they will come

Ion Fury is the first game made in Duke Nukem 3D’s Build engine for 20 years. Voidpoint’s use of Build allows it to imbue Ion Fury with an incredible sense of detail - there’s not a wall, texture, or area that isn’t packed with personality or some cute Easter egg to find. It’s not the best-looking game of the year, but no other game will have as much to see.

And when I say ‘a mile’, I’m exaggerating, but not by much – some levels in Ion Fury are gigantic and, what’s more, appear to be even bigger. The opening zone, for example, is set at the top of a series of towering skyscrapers, with a cloud layer far below. It reminds me of Jedi Knight’s vertigo-inducing Nar Shaddaa level, except less linear. That’s not to say Ion Fury’s levels are open-world or anything, but you often have so many paths forward that it can be overwhelming – and never less than thrilling. 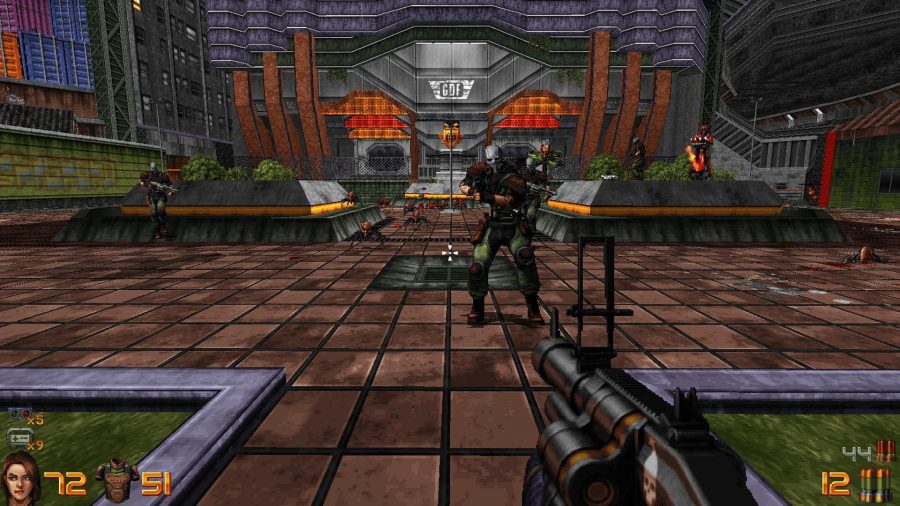 The detail in these levels is also fantastic, with some great environmental storytelling like a soldier pinned to a wall with a rocket, or, a urinal that flushes, er, brown water. You’ll want to explore every nook and cranny, which is just as well, because the levels are filled with some of the most devious secret areas in any FPS. We were combing every inch for hidden switches, covered entrances, or suspicious cracks, and we still only found less than half of the game’s secret areas. There may be no multiplayer, but you’ll need to spend hours to find everything – it took us around 12-14 hours to finish, and we’re pretty sure we missed at least one secret level.

If there’s one issue we have with Ion Fury, it’s location variety. While there are occasional standouts – like levels set on a moving train, a forest, or the aforementioned skyscrapers – you’ll spend the majority of your time in grey, crumbling cityscapes, which can start to feel a little repetitive after a while. You begin to long for the same imagination demonstrated in the enemy design and gameplay. 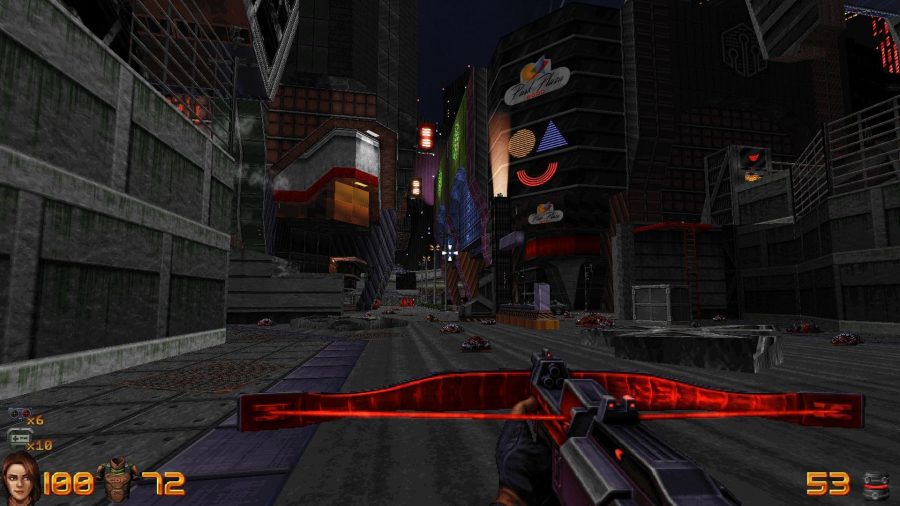 Nevertheless, what goes on in those spaces is never boring, and Voidpoint finds impressive variety within its urban setting of Neo DC, such as twisted research facilities, train stations, or spacious offices. And despite being based on a decades-old engine, Ion Fury somehow looks good. Whether it’s a neat enemy animation, the vast open areas, or the ridiculous attention to detail in every location, there are plenty of moments where you won’t see the use of the Build engine as just a retro throwback, but rather a stylistic choice.

We were regularly taken aback when presented with what this engine, which powered so many clunky shooters from our childhoods, could somehow achieve on modern tech and with modern design sensibilities. Such moments of contrast actively added to our enjoyment of Ion Fury. It’s lovely, and we wouldn’t change it for all the Unreal engines in the world.

A nostalgic '90s throwback that's challenging, funny, cleverly designed, and shockingly attractive both despite and because of its ancient engine, which enables gigantic levels packed with detail.