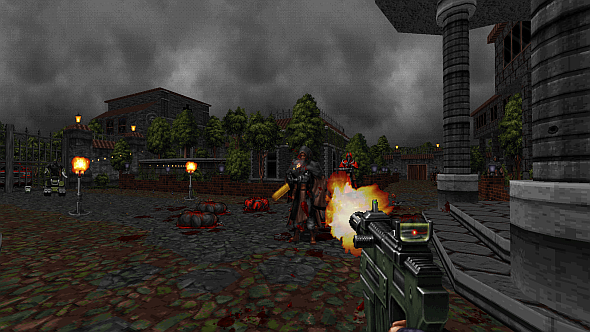 Who remembers the Build engine? If you were playing games in the days of Duke Nukem 3D, Blood, Shadow Warrior, Redneck Rampage, and many others, then you’ve enjoyed the products of 3D Realms’ prolific and distinctive tech. Get ready to so all over again with Ion Maiden, a new shooter that will use the Build engine in 2018.

Relive the glory years in the best classic games on PC.

The plot is bombastic in all the best traditions of 3DR’s Build engine games. Protagonist Shelly ‘Bombshell’ Harrison is out to save a near-future city, Neo DC, from a cybernetic army commanded by a transhumanist cult leader, Dr Jadus Heskel. Expect to spray ludicrous gibs across huge, multi-path levels vivisected by keycards and rammed full of easter eggs. You can check out the announcement trailer above for a hit of nostalgia that’s rather weirdly leavened with anticipation.

Ion Maiden is due for a full release in Q3 this year, but it’s in early access as of yesterday – you can play a polished, multi-hour preview campaign right now. Better yet, there’s a 10% discount off its £15.49 ($19.99) price if you purchase it before March 7. 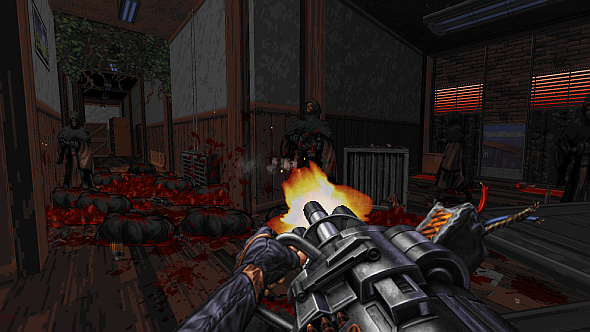 In another weird twist, Ion Maiden is actually being published by 3D Realms, who in their FAQclaim to be “the same ol’ nearly 30-year old company” that brought us the Build engine games of yore. They even say some of the very first employees of 3DR, including founder Scott Miller, manager Bryan Turner, and community manager Joe Siegler are all back, alongside “new leadership, fresh talent, and the help of industry legends”.

They claim to have big plans for digital distribution, publishing, and developing new games and IP. Speaking of which, Ion Maiden will be the first official 3D Realms IP in the Build engine since Shadow Warrior, back in 1997.

“Bringing back classic Build engine shooters has been our aim for years, so we’re diving right into a spiritual successor to the games which put 3D Realms on the map,” says Frederik Schreiber, vice president. “The team assembled for this project knows exactly how to execute our vision, and we couldn’t be more excited to finally bring back a true 3D Realms shooter.”