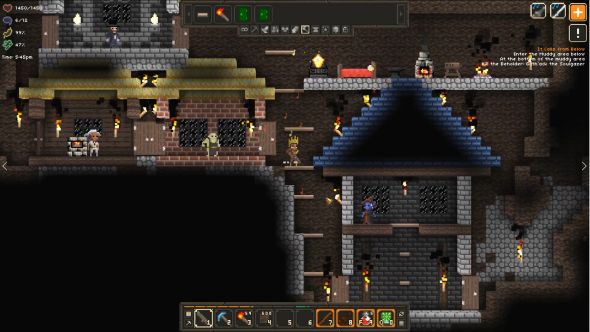 The new game from the creator of Diablo and Diablo II is now available on Steam. It Lurks Below entered Early Access last night, after being announced in February.

It Lurks Below is a one-man indie project from David Brevik, who created the first two iterations of Blizzard’s famous dungeon crawler. Visually, it’s reminiscent of games like Terraria and Starbound, but Brevik says it’s more of a cross between those games and Diablo, describing it on Twitter as “a real RPG with stats, random affix items, character classes, runewords etc.” Its combat definitely looks more chaotic and fast-paced than Terraria’s, with some true monstrosities lurking in the shadows.

Brevik says the game’s Early Access status is an attempt add more content, including new bosses and unique items, but he also wants the community to contribute to discussions about balance. The game has been in development for roughly sixteen months, and Brevik says it should see its full release later this year.

Brevik formed Blizzard North in 1993, where he worked on Diablo and Diablo II, before leaving the company in 2003. After that he founded two studios, before moving to Gargantuan, and then Gazillion, before leaving to set up Graybeard Games, his current project, in 2016.

It Lurks Below is available on Steam now, although some users did seem to be having problems purchasing it last night. Those issues seem to have been resolved now, however.