Last week, while rummaging around Ubisoft’s bins in search of old bits of food, I came across a juicy video games scoop: a thick ream of paper containing the entire script of the recently announced video game, Assassin’s Creed Unity.

Chronicling the adventures of an assassin during the French Revolution, the ambitious five hundred page document includes almost every significant figure from one of the most tumultuous eras in the country’s history: Louis XVI, Pierre Corneille, Louis Pasteur, both Jacques (Cousteau and Vielleneuve), they’re all in here.

Rather than spoil the entire plot for you, I’ll simply give you a taster of what to expect in Ubisoft’s Assassin’s Creed sequel. So, without further adieu, I present to you the first two scenes from Assassin’s Creed Unity that I definitely did not just make up when I heard about the game forty five minutes ago.

Louis Pasteur wearily turns to face his diabolical machine once again, before resuming his explanation. “As I was saying, the blade component is connected to the frame by means of this rope, which runs through the horizontal beam up there and back down to this safety latch. I don’t have a name for my invention yet but– Ezio! Are you even listening to me?”

Ezio is idly placing a flask of milk on top of a bunsen burner. “Pardon moi,poindexter, I was just finding somewhere to put my flask of milk that I carry around with me. I hope you don’t mind I’ve just put it on this bunsen burner. Anyway, what am I supposed to do with this beheading contraption of yours?”

Pasteur sighs wearily. “Like we planned, you are to wait until tomorrow morning when King Louis XVI is carrying out his routine inspection of all the neck holes in all of the beheading contraptions in Paris, before cutting this rope and beheading him, thereby kickstarting a period of radical social and political upheaval in France from 1789 to 1799 that will probably be known as the French Revolution.”

“Don’t sweat it babes, I got this,” smiles Ezio confidently, pointing his two fingers at Louis Pasteur like little guns and then recoiling each one slightly, as if he were firing them both one after the other. He raises his fingers to blow imaginary puffs of smoke from them before turning with a dramatic flourish and clambering up on to Louis Pasteur’s windowsill.

“Let’s just hope your plan isn’t… Pasteur sell by date,” he inexpertly puns as he leaps out the window into a pile of hay, and then starts running along loads of rooftops, climbing all over the Arc de Triomphe and sometimes doing cool backflips. 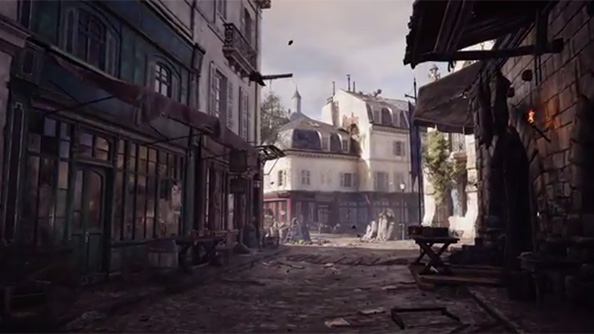 “Ezio, wait!” comes a distant voice from the street far below. “It’s me, your good friend, young Charles de Gaulle.”

“Do you mind?” yells Ezio impatiently. “I’m halfway up the bloody Eiffel Tower here. Actually, hold on, had the Eiffel Tower even been built around the time of the French Revolution? I’m not sure, but I can’t quite see the point of setting Assassin’s Creed in Paris without having the Eiffel Tower, so it may as well be here. Anyway, what do you want, you cheeky chops?”

“Well it’s sort of embarrassing really. I’ve lost one hundred baguettes, fifty berets and about a dozen of those weird necklaces made of onions all across Paris,” young Charles de Gaulle informs. “Also, two hundred sparrows stole two hundred of my finest croissants and placed them in their nests, which are also scattered all around town. I think if you can retrieve all of my things I’ll finally have the courage to pursue my life goal. My dream of building a port.”

“You mean a port for boats, right? A boat port? There’s no such thing as planes yet so it’s the only kind of port I know,” enquires the naturally curious Ezio.

“No Ezio! A port for aircraft. An airport if you will. Charles de Gaulle airport, I’ll probably call it.”

Ezio turns to face the camera and shrugs, as if aware of the 100% historically accurate adventure that’s now quickly unfolding ahead of him. “Here we go agaaaiiin!” he laughs as we cut to the game’s title screen. A dubstep cover of ‘Je Ne Regrette Nien’ begins to play.

Meanwhile, back in the lab, Louis Pasteur is now thirsty for milk. “I do love milk,” he cheerfully announces to nobody at all, “but it’s a shame it’s so full of germs in this century, otherwise it’d be lush.” The famed microbiologist places his hands firmly on his hips and cranes his stiff upper body left and right, searching the lab for some milk to drink. He finally stops, locking eyes on the flask of milk Ezio had accidentally left on a bunsen burner.

Louis Pasteur licks his lips as he strides towards the milk, hands still on hips, shouting “I hope I don’t make any important discoveries in the next two minutes.”