Jagged Alliance is back and once again you're freeing a small island from the grip of a tyrant. However, this time, your mercenaries are older and age has not been kind to them. Weak knees, PTSD, and poor eyesight mean that your warriors need a sympathetic hand when being guided through this island revolution.

Between missions you must rest your troops, craft and repair new weapons and armour for them, and then choose where on the island you want to strike – whether it be at the heart of your enemies' operations, or to raid places that will give you the resources you need to fight soldiers, starvation, and sickness.

Many games have picked up Jagged Alliance’s mantle in recent years, with XCOM and BattleTech both being recent examples of that same blend of turn-based tactical missions fitted into a larger, strategic campaign map. Jagged Alliance: Rage! looks like it will fit in well beside them, using similar systems and tools to make every decision in every battle meaningful.

Set 20 years after the original

Jagged Alliance: Rage! takes place a full 20 years after the original. That’s not so much to make changes in the equipment you’ll have access to – you’re still essentially a jungle rebel armed with AK47 equivalents and hunting knives – but to make it so your familiar mercenaries are now much older. Ivan, the heavyset Russian from the original game is back but now suffers from alcoholism. He’ll act as your heavy weapon specialist but if he doesn’t have ready access to booze he’ll start getting the shakes, which throws off his aim, making him a far less effective fighter. Other fighters suffer from panic in night fighting, others can’t handle the sight of civilian deaths, and then there’s the likes of the slim Spec Ops soldier Shadow who is particularly susceptible to illness.

When you start a campaign you can only pick two mercs from the roster, so you’ll need to balance their strengths and weaknesses. This also means that each island campaign will have a distinctly different tactical flavour depending on which two mercenaries you take into the field. 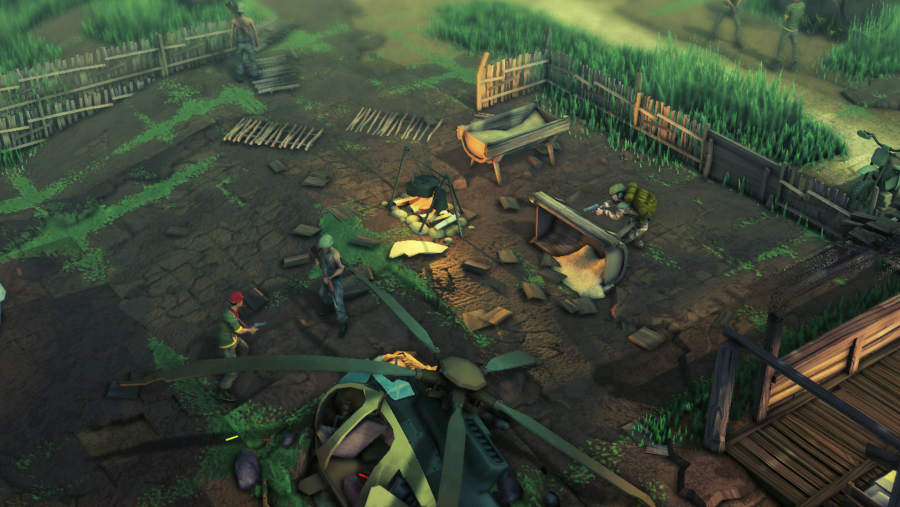 Like its predecessors, Jagged Alliance: Rage! is a turn-based tactical game, much like XCOM. Your fighters will arrive in one corner of a hand-crafted map populated by enemy soldiers and you’ll take it turns with the AI to sneak and fight your way to victory – be that eliminating all enemies, freeing hostages, or destroying objectives.

Combat in Jagged Alliance is unforgiving, with each of your mercs only possessing a few flimsy hit points. Damage can be negated by armour but it’s a much better strategy to stay hidden, taking out enemies with stealth kills for as long as possible. When you must join a full-on firefight, it’s important to get behind cover, increasing the chance of enemy shots missing.

Jagged Alliance uses an action point system, which dictates everything you do. You can only move as far as you have action points to move, and that distance is significantly shortened if you’re sneaking. Abilities like whistling to lure an enemy, setting a mercenary up in overwatch, or firing your weapons all require action points, too, so you’ll have to think about whether you really want to move closer to your target for a better shot or just stay where you are and fire your weapon twice.

When firing on a target you can choose to shoot at the legs, body, or head, with much greater chance of hitting on a body shot. You can spend more action points to increase your hit chance though, if you really need to pull off a headshot, for instance. 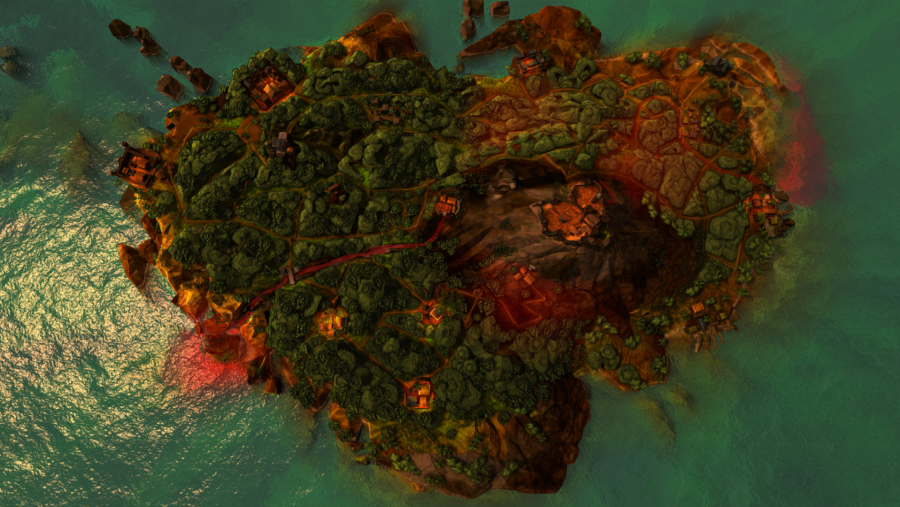 The first missions of Jagged Alliance’s campaign are going to be linear as you fight your way out of captivity and meet with the local rebels. But the campaign soon opens up into one where you call all the shots. The island is covered in a web of possible routes and missions – villages that need to be freed, enemy camps that can be destroyed, and more unusual locations appear, like reservoirs and water treatment facilities. This is because you aren’t just fighting to clear the island of enemies but to support your revolution as you go.

Your soldiers need access to water or they’ll become dehydrated. You can find water bottles on the bodies of soldiers sometimes but a better bet is to take control of a reservoir. If you have Ivan on your squad you need to feed his alcohol addiction, so this might lead you to taking control of a storehouse. The island has a major pollution problem, with the enemy’s operations pumping out toxic sewage into the sea and rivers, so if your mercenaries drink polluted water or stay in dump sites for too long they’ll become ill. You want to make sure you do what you can to treat the island’s water when the opportunity presents itself, then.

Time passes as you move around the island, too, meaning sometimes you’ll be fighting at night, sometimes in the day. This can play a huge part in missions, both in the obvious – you and your enemy can’t see as well – and the more subtle – some of your soldiers can’t stand the dark, others thrive in it.

Jagged Alliance’s island changes in ways you can control and ways you can’t. All of it needs to be taken into account when you’re making strategic decisions in the campaign. 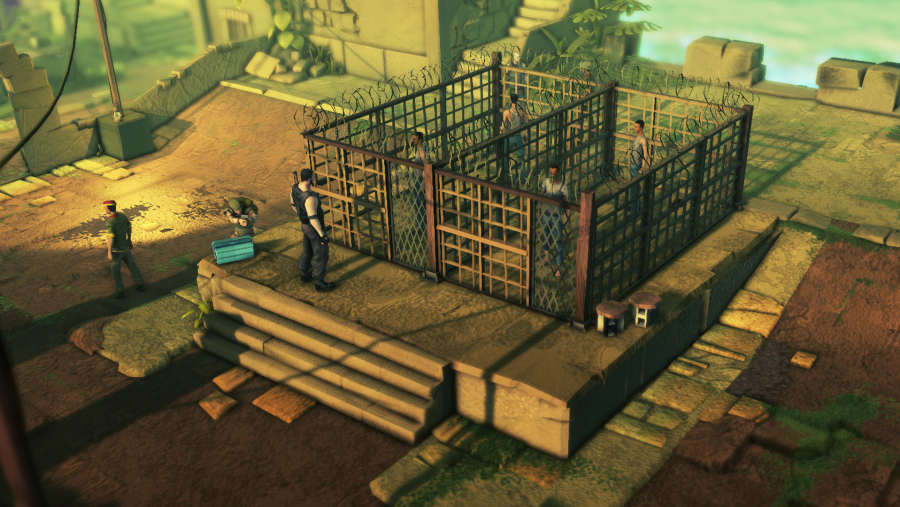 surviving on your worst day

You’ll rarely find yourself in a position of perfect strength in Jagged Alliance. Your soldiers’ wounds carry between battles, only healing when you take the time to rest. Wounds can fester and mercenaries can develop illnesses when they aren’t fed and watered, and when they fight in toxic regions. Your equipment can fall into disrepair, your ammunition runs out, and your mercenaries have their own specific foibles about the environment they’re fighting in.

Jagged Alliance is similar to BattleTech and XCOM, then, in that each mission is complicated by the needs and status of your team. If the developer can pull it off, there will be a rich flow of effects feeding into each mission, informing your choices and challenge. Rush through the campaign and your mercenaries will flag with failing health and equipment. Make slow progress, taking over as much of the island as you can and your enemy will respond, leading you into more frequent combat. 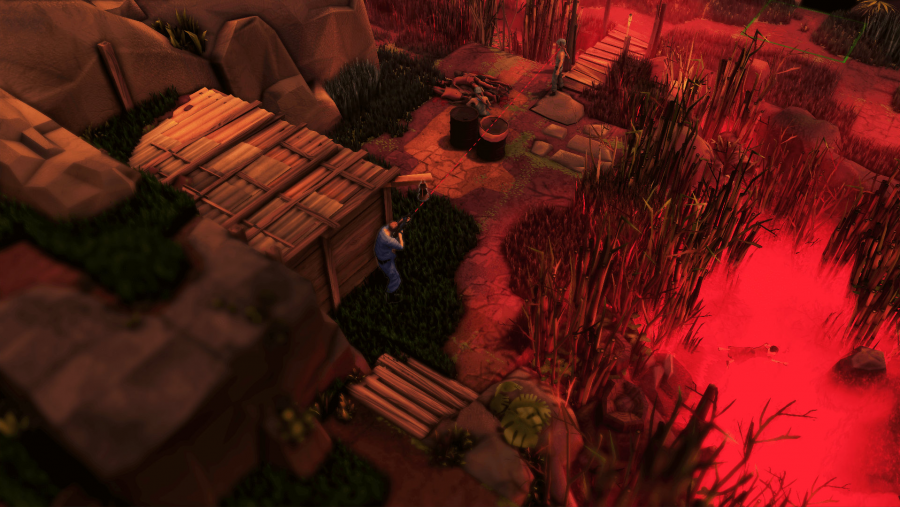 Jagged Alliance: Rage! gets its title from a new resource that is gained when your mercenaries take damage and get angry. Rage points are used to power special abilities – for example, Dr Q can channel his anger into more action points, and Shadow can use his Rage points to move unseen through an enemy’s line of sight.

It’s a potentially great system for getting you out of a corner. Although, banking on Rage points isn’t going to be a good way to play, as receiving damage has so many long-term dangers.

Rage isn’t always good, however. In Grunty’s case, his weak heart means that if he gains too much Rage without expending it then his heart will give out and he will die.