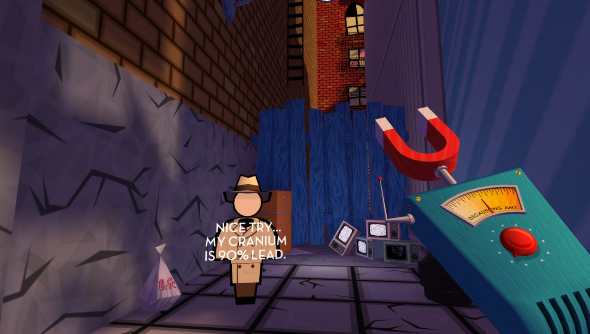 I’m on a mission to steal top secret information from the Ruskies. I’ve hacked their super computer with a spin-dial telephone, and I’m on my way out. I find a photocopier. I jump on top, trousers down, and expose my robotic arse to its glass face. Photograph of my bum in hand, I show it to the retinal scanner at the exit door.

Welcome to Jazzpunk, where some of the funniest jokes in gaming history are fired off at the rate of a tommy gun. Unfortunately though, like a tommy gun, its ammunition runs out before the shoot-out has ended. 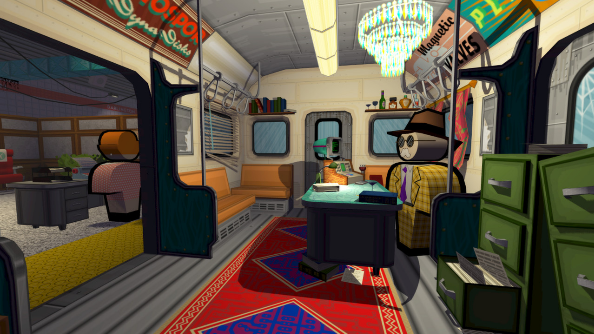 Jazzpunk is a first-person adventure game that lampoons Cold War-era spy missions, and cracks jokes at almost every thinkable target in between its four main missions. You play Agent Polyblank, a freelance infiltrator working for a drunken spymaster who operates out of a subway coach. Each mission is activated by popping Missionoyl pills that teleport you into/cause you to hallucinate new levels. Think of it as an episode of Archer directed by Mel Brooks and starring Leslie Nielsen.

As mandatory for a spy story, locales range from the seedy to the exotic. Geisha-filled backstreets of Japan and a Tiki-themed beach resort are populated by chunky, cartoon robots that deliver punchlines through buzzing vocal filters. Talking to each and every one of them in each of the hub-like areas becomes compulsive; all characters come armed with a sharp line that results in howling laughter. My personal favourite came from a Japanese fembot asking “Do this dress make me look Fat32?”, but the jokes go beyond computer geekery, revelling in pop-culture and the downright weird. Importantly, you’re always an integral part of the punchline, be it throwing bacon and eggs into someone’s face (your victim calmly informs you he has third degree burns all over his face) or fulfilling a cheese fetish for a toffee-nosed gent. Jokes jump beyond the realm of the game too; catch a mechanical pig and you’ll find a QR code on its rump which you can scan with your real phone, resulting in the message that you shouldn’t eat the electric pig. You’ll eat it anyway, and the kind of result you’re already imagining doesn’t even come close. 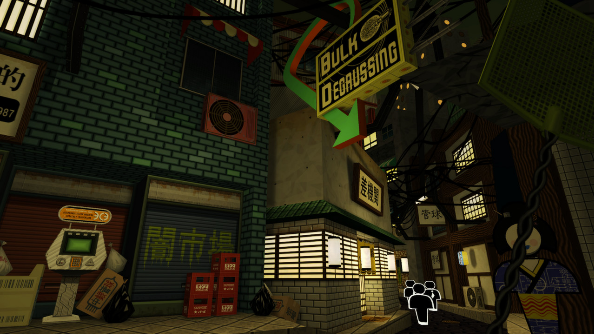 Finding these people and participating in their jokes makes up the bulk of Jazzpunk’s appeal and enjoyment. Your actual missions – barely more than bumbling from one place to the next and solving a few obvious puzzles – probably take up forty minutes of the game’s two hour run time. They’re consistently amusing but feel almost a distraction from your real quest of seeking out the best hidden gags. In this way Jazzpunk feels closer to Gone Home than any of its more obvious comedy peers, but instead of scouring every surface for letters and backstory you’re hunting down every last punchline and wink. Each new area is essentially an art gallery to be perused for film nods and fart gags.

This is the case for the first hour, at least. As the minutes tick by the game starts to falter. It’s not that the joke wears thin, it’s that it warps into something that fails to work. Sharp dialogue is replaced by mini-games, and they offer up tedium over titters. Street Fighter II homage Polyblanka vs Some Honda is an amusing reference, but spending the time beating every panel on a car feels slow and hard-work. Later on the villain challenges you to crazy golf, which you play with a pool cue. The first hole was amusing. By the third hole, the comedy had evaporated. Constant reliance on these sections causes the latter portion of the game to become dry and barren of laughs, populated instead by simple tasks that outstay their welcome by several minutes each.

A fumbled finale puts a notable stain on the experience. They say one of the key rules in comedy is to leave the audience wanting more, but as Jazzpunk’s credits rolled I was left feeling a little indifferent. But the game is something to be admired. Few titles dedicate themselves to comedy as wholly as Jazzpunk does. This is a game that delivers every silly, bizarre moment with a toothy grin and a badum-tish, waiting with barely contained excitement to deliver its next surprise. A few may be booed off stage, but when so many can hit the mark as closely as they do, I can’t deny it a round of applause.