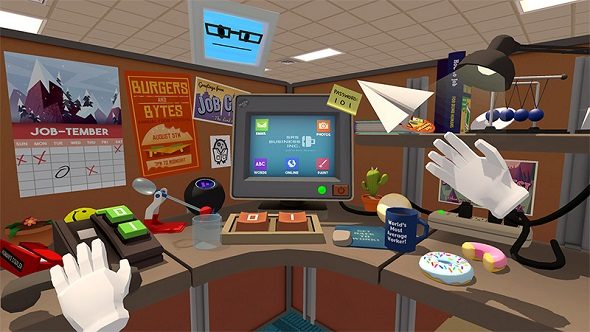 Google have continued its expansion into the world of virtual reality, by acquiring VR studio Owlchemy Labs. Developers of the award-winning Job Simulator and Rick and Morty: Virtual Rick-ality, the studio will keep making games for VR platforms like the Oculus Rift and the HTC Vive, but now with backing from Google.

Stave off virtual insanity with our list of the best PC VR games.

Known for creating VR games where controller actions mimic that of real hands, Owlchemy Labs will continue to “focus on hand interactions and high quality user experiences” while part of Google. Games like Job Simulator and Virtual Rick-ality are known for the havoc players can cause with their floating VR hands, so don’t expect Owlchemy to stop creating experiences with realistic prodding physics any time soon. According the Owlchemy blog post announcing the acquisition, “Google and Owlchemy are so well aligned on [their] goals and vision for the future of VR”, that the studio may influence future versions of Google’s own VR headset, the Daydream.

While they did not start as a VR developer, Owlchemy Labs shot to prominence after creating Job Simulator during the early days of the Oculus DK1. Acting as a launch title for almost every major VR headset, Job Simulator has become the way of introducing new players to the world of VR gaming. Owlchemy also pioneered a way to stream VR footage with their unique Spectator Mode, allowing for the explosion in VR streams when Virtual Rick-ality launched last month.

According to The Verge, “Owlchemy isn’t imminently announcing any new projects” but expect more news on the acquisition to come from Google’s I/O developer conference next week in San Francisco. It may be a while before we see the fruits of this partnership, but it definitely points to Google expanding its reach within the VR space.