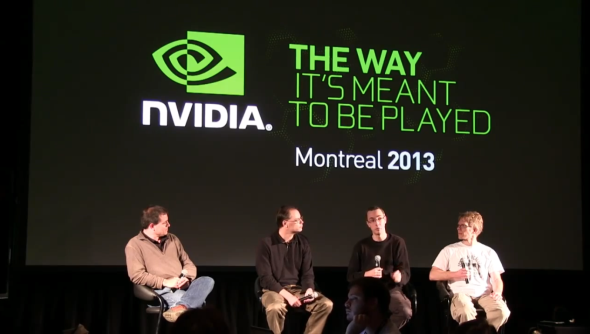 At Nvidia’s Montreal conference, when asked for his opinion on Valve’s recently announced SteamOS and Steam Box, John Carmack initially called the plans “dicey”. Expanding on that he said “if it were some other random company I would be pseudo-scornful but it’s Valve so I’m not.”

The main struggle he sees is getting everything moved over to Linux. Though, as he readily admits, he’s been horribly wrong when it comes to Valve.

“Valve approached id at the very beginning of Steam asking about launch title status for Doom 3,” said Carmack. “And we basically said, “Are you crazy? It would be nuts to tie yourself to this little notional digital distribution platform” but, clearly, Valve have played a good, strong long game.

“I’m afraid that I might be at that same point right now where I’m like “making your own console OS? Are you crazy?” Maybe ten years from now they’re going to look like they’ve made billions of profits again with it. It still seems a little bit dicey to me, getting everything moved over to Linux, pushing from that side of things, but given their track record I’m a little hesitant to… if it were some other random company I would be pseudo-scornful but it’s Valve so I’m not.”

“There’s a lot of fear from the major publishers, and the major developers, of being tied down to platforms that are ultimately controlled by Microsoft and Sony, or others,” weighed inEpic’s Tim Sweeney. “Absolute control over certification is scary and their control of econgress rules out possibilities where we would like to have direct relationships with our customers and they prevent it. The possibility of Steam Box as a real, genuinely open platform based on Linux with multiple manufacturers that’s jump-started by Valve but isn’t absolutely controlled by Valve in the same way that Microsoft and Sony control their platform is very interesting. It’ll also go a long way to steering the console manufacturers into pursuing an enlightened path.”

The conversation kicks off at the 30 minute mark:

All three members of the panel agreed that it’s simply too soon to say for certain how successful Valve’s approach will be but that it has the potential to completely change the game industry’s landscape.