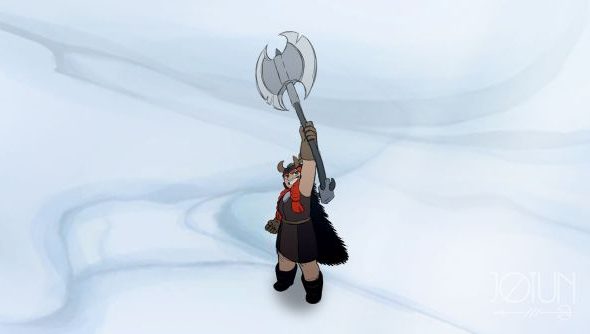 I first came across Jotun when the Kickstarter was running and thought, literally, that it was too good to be true. The art was so lovely but the prototype footage so simple, I could never imagine them jelling into one, nevermind being playable or fun. With the greatest of thanks, I was very wrong. Recently entering a beta-backer phase, there’s a lot more video out there for Jotun and it looks just wonderful.

Here’s their latest trailer, showing off a new boss:

The plot of Jotun is that you areThora, a norse warrior who has died ingloriously. Now she has to prove her worth to the gods so they will let her into Valhalla. She does this by killing Collosi-style bosses called Jotun in a top-down puzzle-fight combo.

It’s completely hand-drawn, hence the exceptional art. Here are the two main developers going through the first beta level, which sadly isn’t available to anyone who’s arrived late to the party:

It’s as much about exploration as it is combat, or at least that’s the sell. There seem to be very few fights that aren’t against bosses. Finding items to increase your health and god powers to give you more options is as important here as levelling up through killing enemies is in other RPGs. I’d be happy to just wander it for hours and we’ve seen a lot of success for these types of games recently, most notably from Titan Souls.

I can’t wait. The original release timeline was September and it looks like they could hit it given they’ve already arrived in Beta, but ‘at least this year’ seems like a safer bet. Follow development on the Kickstarter update page.