The developers of Journey to the Savage Planet have been calling the game a Metroidvania since it was announced back at The Game Awards, but it wasn’t until I got to play it that I realised the influence is much more specific than that – it’s Metroid Prime. Sure, we’re trading foreboding galactic jungles and decrepit research stations for a much more colourful, pulp-inspired flavour of sci-fi, but there’s no mistaking the influences of this first-person exploration game.

The developers aren’t hiding those influences, either. “The only game that’s doing this is Metroid Prime 4,” as I was told during my demo, “and who knows when that’s coming out.” You’re a lone space adventurer, out to explore the universe for fame, fortune, and the benefit of your corporate overlords. While you’ve got a gun and more than a few unfriendly aliens to shoot, the focus is on navigation. In the game’s opening area, that means hopping between floating rocks and massive mushrooms as you seek the path forward and upgrades hidden along the way.

First-person platforming has historically been a sketchy proposition, but Journey to the Savage planet offers a broad, floaty jump and an extraordinarily generous mantle when you’re just shy of the right height, both of which keep the platforming from being frustrating. Double jumps, dodge boosts, grapple points, and plenty of other mobility options ensure you feel agile more often than clumsy.

The other obvious Metroid Prime connection is the scanner. You can activate it at any time, then hold down a button to scan flora, fauna, and other objects of interest. Doing so will unveil flavourful lore, as well as occasional leads on side quests and paths to more upgrades. But here, the aliens you’ll scan look much sillier, and you’ve got a gently sardonic AI voice offering guidance – not to mention the bizarre live-action video ads you’ll see whenever you return to your ship – which makes this a much less isolating take on Metroid than Metroid.

While many of the upgrades serve as very direct keys to progress – using a high jump to reach a tall platform, for example – many puzzles put emphasis on more systemic solutions. A lot of items and objects you need to interact with in order to progress are encased in amber that can only be melted with acid. You can pluck drops of acid from certain plants to hurl at the amber – though you can only hold them for a few seconds without an upgrade – or you can lure an acid-spitting enemy to dissolve the amber for you. These types of puzzles deliver a generic hallmark of Metroidvanias, but with a little more imagination and variety in the packaging. 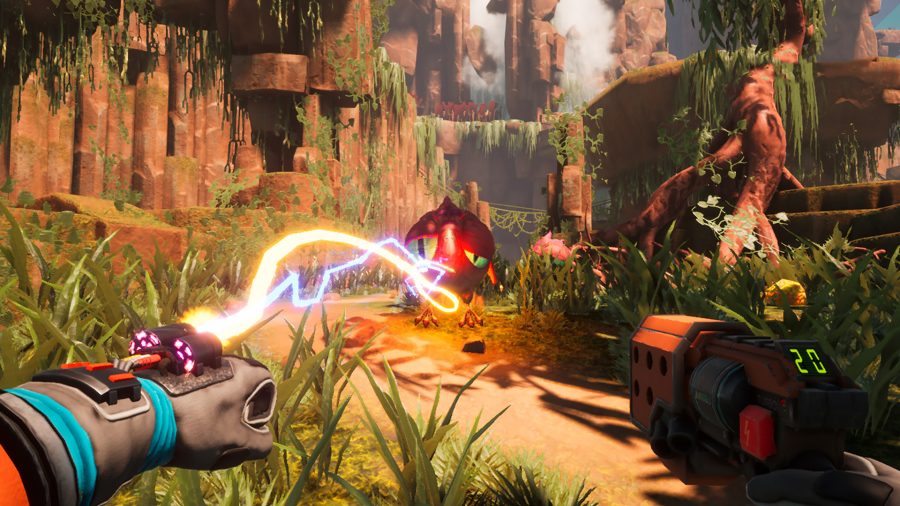 Even the more traditional upgrades are delivered in a non-traditional way. You get specific blueprints for things like jump boosters, which then appear on an upgrade tree, where you have to spend resources gathered in the world to actually build them. You’ll get gun upgrades as well, though you’ll be using your humble pea-shooter throughout the game. Don’t expect it to transform into a shotgun or anything, but it will get powered up with new abilities like charge shots, and the like.

While you can tackle the alien locales alone, you can also partner up online for full co-op throughout the game. You can drop in or out at any time, as you’ll essentially spawn off the game’s host with all the same upgrades and abilities. The developers say they wanted to make sure you’re never in a position where you’re underpowered or overleveled to join your friends, especially given the game’s small scope. 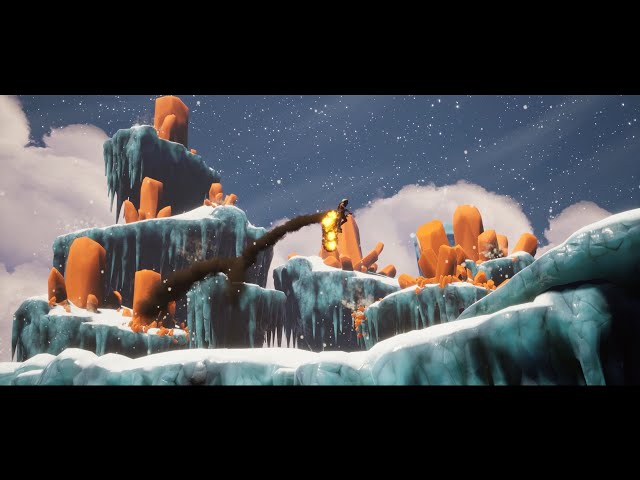 Each of the four main areas is basically self-contained, and features a non-linear web of paths which eventually lead to a boss and then the next big location. One such boss is a massive bug holed up in a cave and coiled around a central pillar. Once you shoot its giant, glowing eye, a number of weak points open up around its body, which you must then shoot individually. It’s more about getting around the cave to fire on those points than dodging attacks, which reflects the heavy focus on exploration over combat.

The real question with Journey to the Savage Planet is how well its level design will marry gentle guidance toward interesting parts of the environment with a sense of freedom. It’s the mark of any good game in the Metroid mold, and the part that’s toughest to get a sense of in the guided demo that I saw. Either way, I came away impressed, and I’m looking forward to seeing how Journey to the Savage Planet turns out when it launches January 28, 2020.