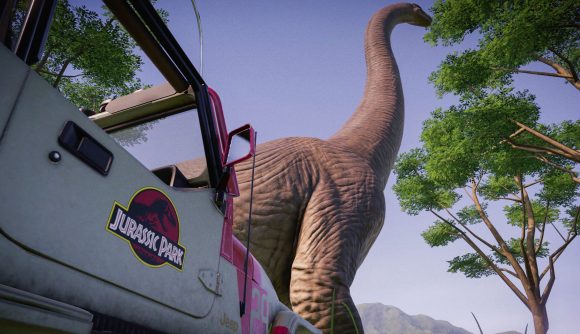 Jurassic World Evolution does an admirable job of letting you build a park filled with the franchise’s majestic dinosaurs, but let’s be honest here – it’s not the Jurassic World aesthetic that most fans have affection for. Developer Frontier is about to properly capitalise on your nostalgic dino love, as a new bit of JWE DLC is going to take us back to 1993.

Return to Jurassic Park launches on December 10 for $19.99 / £15.99 / €19.99, and gives you seven new story missions set in 1993, just after the original film. The story mode asks you to rebuild and reopen parks on Isla Nublar and Isla Sorna, reunites the film’s original cast – Sam Neill, Laura Dern, and Jeff Goldblum will guide you through the missions as Alan Grant, Ellie Sattler, and Ian Malcolm, respectively.

The DLC adds old-school skins for the dinosaurs – including the velociraptor and T-rex – and adds new creatures including the compsognathus and pteranodon – which suggest we’re getting some flavour from The Lost World and JP3, too. The pack adds new attractions, like the park tour and the iconic main gate, and will also let you play the base story with the old-school overlay and aesthetics.

You can take a look in the trailer below.

Alongside the DLC, a free update will rework how rangers interact with dinosaurs, how guests interact with toilets, and features a few “general fixes and tweaks.”

Check out more great sandbox games if you’re for further ways to play it your way on PC. But you know where to go if you’re looking for dinosaurs.