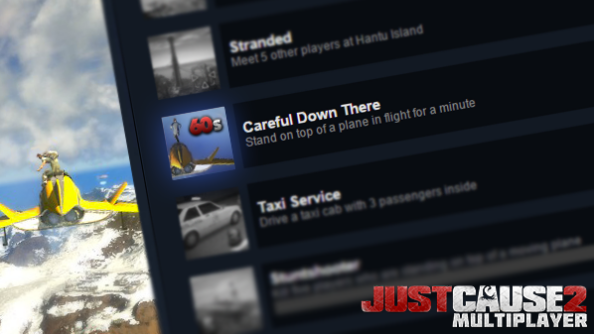 A couple of months ago the Just Cause 2 Multiplayer Mod team created a chunky new patch and put it into public beta. This week (November 11th, to be precise) that patch goes live for everyone, and finally brings a huge set of fixes and additions to the mod. The big addition that lots of people will be excited for is the addition of Steam Achievements, but there’s lots more to come too.

No surprises here, but Just Cause 2 is one of the best sandbox games on PC. Take a look at the list to see what else made the cut.

The 0.2 release patch adds scriptable client actors, so players can create their own NPCs. Civilian models are now supported, allowing a vast range of characters. Depth Tested Rendering is now allowed in the game world, and basic unicode supports adds more languages. The menu has been overhauled for easy access to favorite servers, and Steam Achievements can now be unlocked by completing tasks with other players.

The massive changelog with all the smaller changes and bug fixes can be found over at the Just Cause 2 Multiplayer forums.