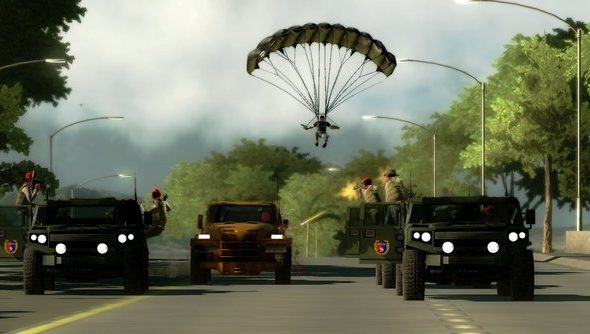 Jeremy Clarkson may be gone from the BBC but his voice recordings live on in this Just Cause 2 machinima. Tanner Productions have stripped the audio from one of Top Gear’s challenge segments and fit it to footage of Avalanche’s open world joy machine.*

The result is simply wonderful.

In the original segment, the Top Gear presenters split into two teams, each racing to get from their shared starting point to a hotel a few hundred miles away. Richard ‘The Hamster’ Hammond and James ‘Captain Slow’ May were travelling by plane and Jeremy ‘recently-fired-for-punching-a-producer-but-not-for-any-of-the-racist-remarks-made-on-television-in-recent-years’ Clarkson travelled by car.

Tanner Productions have adapted the sequence to the tropical island of Panau and it works perfectly:

The video comes into its own when they start creating new scenes around the audio, for instance having Hammond and May shot down by a missile, or Clarkson attacked by a gang of machine-gun wielding paramilitary.

Like Kotaku, I hope we’ll see the entirety of the Top Gear back catalogue recreated in Just Cause 2 and its sequel.

*No virtual producers were harmed in the making of this program.