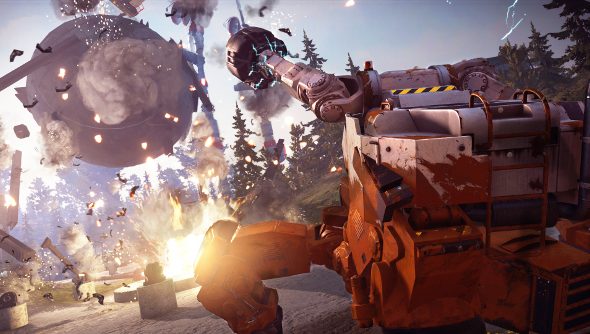 Just Cause, as a series, is quite silly. That might not be news if you’ve actually been awake at some point in the last ten years, but the Air, Land and Sea set of content packs are pushing the point home for Just Cause 3. Today’s addition, Mech Land Assault, does exactly what you might expect – adds a pair of massive walkers equipped with gravity manipulation devices to throw helicopters and tanks around like snowballs. It’s out right now for those who picked up the expansion pass and will release on June 10 for everyone else.

If you’re all about playtime, here’s some more sandbox games for your consideration.

Here’s a trailer with a closer look at these quad-legged killing machines:

To get access to these lovely death-puppies, you’ll first have to head over to a newly added island containing, perhaps unsurprisingly, a secret military research base. Hijacking them isn’t quite as simple as just walking over, with a new energy rifle added specifically for disabling their shields.

Have a read of Matt’s Just Cause 3 mechs post if you want to know more, or just go play it – it’s available right now.