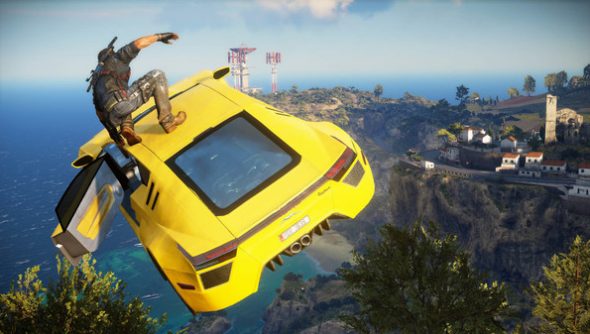 If you like freedom and destruction, you’ll love our list of the best sandbox games on PC.

In a post on the Just Cause 2 multiplayer mod site, lead developer Cameron (Trix) Foote writes:

“We’re regretfully announcing the indefinite halt of JC3-MP development. We know you’ve been waiting for news over this past year – your desire to play it is matched by our desire to make it – but there’s a good reason.

“Good and bad news often come in pairs, and this case is no exception; several months ago, I (Trix) was approached with an offer I couldn’t refuse: to join Avalanche Studios Sweden as a developer so that I could work on projects present and future.

“As part of Avalanche, I’ll be able to bring many of the things you know and love from JC2-MP into future Avalanche experiences, while reaching heights that a mere mod couldn’t facilitate. Unfortunately, due to time constraints, neither I or the rest of the team can actively pursue development on JC3-MP; our lives are just too busy to allow for it right now.”

You really can’t blame him for wanting to take this opportunity up, and it certainly wouldn’t be the first time a talented modder had been snapped up by a developer.

You might be wondering what that means for the Just Cause 2. The developers say they “will still be maintaining JC2-MP where appropriate”, fixing bugs and maintaining stability, though don’t expect any new features.

Hopefully the other in-development Just Cause 3 multiplayer mod from a different team delivers. Here’s a video of how it looks currently (it looks like loads of people wingsuiting through a tropical paradise):