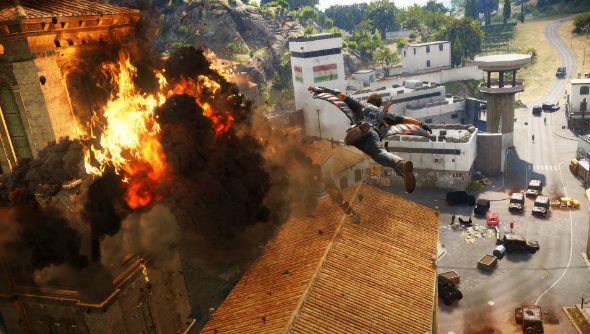 Blowing shit up is something a lot of games do, but very few games get it right. The Battlefield series has always been up there, but its destruction is increasingly more scripted as the series goes on.

I’m all about physics-based destruction, like in Red Faction Guerrilla, or huge mushroom clouds, like Mercenaries 2 – man, why did that series stop being made? Just Cause 3 looks like it’ll have a nice mix of both and will be stepping up the bombast even more.

Just Cause 2 let you do some cool stuff with its detachable tether – I’ll always remember the first time I hooked up a gas canister to a person and shot it, sending him into the air like a meaty firework. Just Cause 3 looks like it will allow for even more sadistic expression, though, with tethering a school bus to a helicopter like a wrecking ball being an everyday occurrence.

The developers have just released a new development diary where they talk about the destruction and the design ethos behind it, which is basically: make it fun. It looks ridiculous, with petrol stations disappearing in a cloud of fire, smoke and debris, and bridges collapsing under a hail of rocket fire from a combat helicopter. Surfing a jet into a radio tower and wingsuiting through the blast looks like it will never get old, too.

The best thing is, PC won’t be held back by cross-gen console development – it’s only coming to PC, Xbox One and PlayStation 4. Just Cause 3 will be released on December 1. Check out the video below: