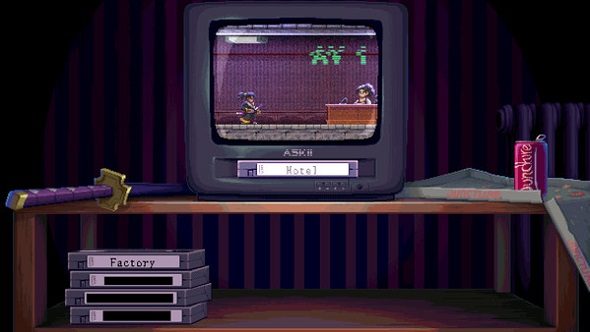 There’s always something cool about an assassin with a katana. It’s nowhere near as practical as a gun, it’s easy to spot and you need years of training to use it well but god, it looks badass. Taking that principle and dialing it up to 11, Askiisoft have released a new trailer for their neo-noir action platformer, Katana Zero.

If you’re in the market for more indies, check out some of the PC’s best ones here.

Based on gritty cyberpunk fare like Blade Runner and Ghost in the Shell, Katana Zero has players take the role of a mysterious assassin, tasked with fulfilling certain hits in order to take back something from his past. Using your trusty katana as well as a special time-manipulating drug called Chronos, players have to sneak, slice and dash through several assassinations in order to reclaim what’s rightfully yours.

Askiisoft have been fairly secretive about the plot of Katana Zero, but they’ve been very forthcoming about showing off the second to second action. A hybrid between Mark of the Ninja, Hotline Miami and Gunpoint, Katana Zero has you skulking through buildings on a 2D perspective, making your way past guards in order to take out your target. This sometimes requires stealth, as seen in the trailer where you have to dodge guards’ line of sight while negotiating a dance floor, or you can just hack everyone to pieces. You can’t linger for too long, as every mission is on a timer, forcing players to keep progressing unless they wish to fail their hit.

Similar to Hotline Miami, any bullet or stab spells instant death for both you and your targets, which means you have to be incredibly careful when negotiating corridors full of hired goons. This is where the drug Chronos comes in, as you can slow time to a crawl in order to deflect bullets with your sword, account for a sloppy jump or to make an kill look extra cool. You can also pick up weapons or objects you find on the floor, meaning you can stop a series of oncoming thugs by quickly chucking knives and potted plants at them.

Combine ultra fast combat with incredibly stylish pixel art and a thumping electronic soundtrack and you have the recipe for a potential action classic. While no news is yet available on Katana Zero’s release date, keep an eye on its Steam page for more information on this cyberpunk slash ‘em up.