I’m too cheeky for my own good. Moments before arriving at a hotel early into Katana Zero, my psychiatrist tells me to carry out a hit on a billionaire drug trafficker, and to do it swiftly. As I arrive in the hotel’s lobby, a clerk tries to greet me as the game’s dialogue options begin to unfold – allowing me to cut her off abruptly or let the conversation flow. Keen to carry out my mission, I rudely stop her from speaking so I can carry on my merry way, leaving her red-faced with anger.

After finishing the night’s deed, I return to the lobby to find the clerk once again, still red-faced, but now flanked by a horde of police who are here to investigate my wet work. Before I can produce an alibi, the clerk cuts me off and tattles on me. Blam! One of the officers opens fire with a shotgun. I didn’t want to have to do this…

The lesson here is that the small details matter in Katana Zero and the personality you choose to portray imposes itself on the story. As a result of my rudeness, I’m forced to take out the police before leaving the hotel. During a debrief afterwards, I’m told the client wasn’t happy that innocent bystanders were killed, and a news report in my apartment echoes the tragedy I was complicit in.

The broader story this is weaved into puts me in the sandals of a katana-wielding hitman stuck in the middle of an unravelling plot of betrayal. To find out what’s wrong from right, I must dance through the neon-bathed slums of an 8-bit depiction of a city, leaving oodles of goons in my wake. It goes hand-in-hand with stylish gameplay that abides by a simple rule: whoever lands the first blow wins. To some, it’s enough to draw a link between Katana Zero and Hotline Miami. But it puts me in mind of stealth-based puzzle platformer Gunpoint.

That neo-noir tale also dropped me in the middle of a mystery, framed for a murder I didn’t commit but was there to see – prompting me to figure out who actually did it. Gunpoint also gave me a selection of quippy dialogue, letting me choose to be polite, rude, or silly – at one point there’s even a nod to David Zucker’s 1990 parody Airplane and its ‘Don’t call me Shirley’ gag. The dialogue matters in Gunpoint too, as it’s through conversation that I can deduce who to trust, which informs how I solve the case. 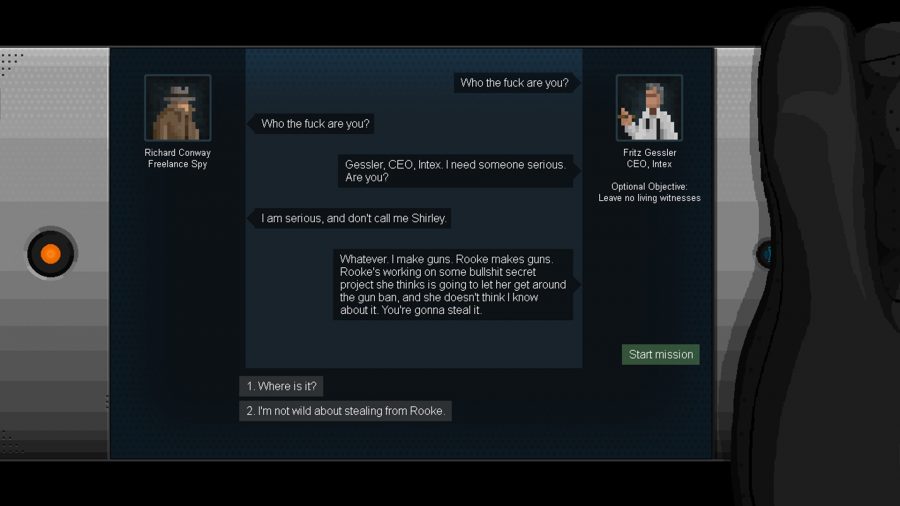 Katana Zero and Gunpoint certainly have their similarities, then, but it’s how they present different spins on film noir that really gets me excited. Katana Zero is more reminiscent of the violent stylings of Korean neo-noir revenge thriller Oldboy. Whereas Gunpoint calls to mind the tales of spies and espionage that made up the earlier parts of cinema’s noir movement in the ‘40s and ‘50s.

These two may seem at odds with each other at first, but both protagonists are conflicted antiheroes, which as Mark Bould puts it in his 2003 book Neo-Noir, is one of the common aspects of the genre. Both games follow a person through a world of crime that traps them in a difficult situation and forces them to make hard choices out of desperation. Playing these two games back-to-back feels like listening in on two people gushing about their favourite aspects of neo-noir cinema. 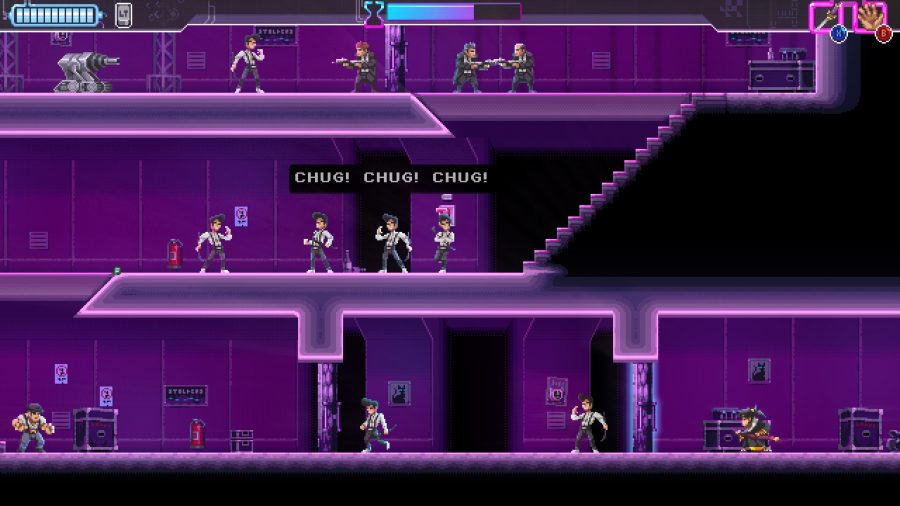 But it goes further as each game’s spin on the genre also influences how they feel to play. They each present a puzzle-like environments filled with goons that have multiple ways to reach the end. The challenge, however, comes from avoiding contact as a single hit means death.

Katana Zero is all about taking this challenge head-on with a jump, invincible dodge, and the ability to slow down time. After each floor, my wet work then plays back to me in a grainy showreel – making this all look like an Oldboy spin-off. In Gunpoint, a sense of vulnerability is more potent, as jumping on enemies to take them out is high risk and harder to do. Instead, the tools on offer encourage me to hack each building’s circuits to create openings so I can slip on by. After each level is done, I fade off into the night without a trace, feeling like a proper spy.

While Katana Zero and Gunpoint encourage different playstyles, they also give a subtle nod to each other’s approach, too. One mission in Katana Zero takes place in a nightclub where stealth must be used to blend in and slip past the guards. And in Gunpoint, the story culminates in attacking an objective with a gun in hand. To me, it shows that despite the various ways Katana Zero and Gunpoint differ, they also align in their love for noir – both its complicated emotional drama and the more straightforward thrill of stark conflict.