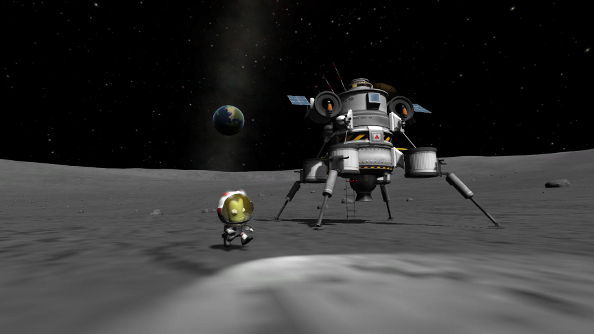 The weaponisation of Steam reviews continues, with Kerbal Space Program the latest victim. The perpetrators: Chinese gamers who are angry with a revision made to the translation of an Easter Egg.

We reckon Kerbal Space Program is one of the best indie games on PC.

Printed on the side of a space shuttle in the main menu is the phrase “不到mun非好汉.” Back in June, a post was made on Steam which translated this as “without reaching Mun you are not a good male” and complained the language was sexist, since when the developers have replaced it.

The problem, according to this negative reviewer, is that the characters “好汉” which triggered the complaint are widely used in a gender-neutral way in Chinese. They mean ‘brave or strong hero’, and have been used to describe women as well as men. Moreover, the initial phrase was a reference to a famous saying, “不到长城非好汉,” which translates to “you’re not a [hero/true man] if you never got to the Great Wall.”

So the downvoters’ complaint is not just that the developers are kowtowing to political correctness, but that it’s unnecessary, and bastardises a traditional saying. One saysthe new translation “has lost the beautiful feeling of the Chinese traditional proverb,”while another compares it toreplacing “all men are created equal”with “all homo sapiens are created equal.”

I’m not sure where I stand on the validity of these complaints and, honestly, I don’t think anyone can be unless they’re a native speaker who understands the linguistic nuances involved. That said, a review is intended to reflect the entire worth of a game, so it seems ludicrous to dismiss all of Kerbal’s brilliance just because of this, valid or not.