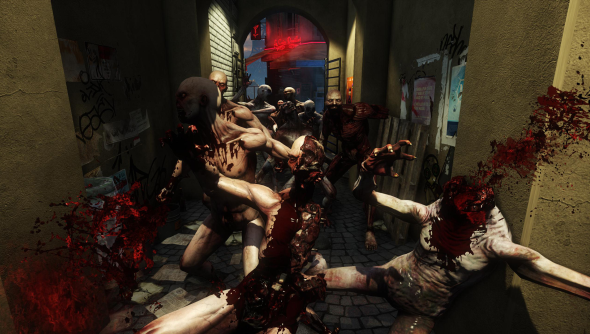 There are 22 dismember points on the bodies of Killing Floor 2’s mutants. Like a meat balloon, shoot any one of them and that limb, digit, or organ will pop into blood, bile, and bits of bone. Five of those points are in the zombie’s head.

For all its added nuance, Killing Floor 2 stays true to what made the original one of the PC’s great success stories: violence, guns, and guts.

Killing Floor 2 is much like the original: you and five friends fight through ten waves of monstrous lab experiments before facing off against a Patriarch, a tough as nails boss creature. Killing specimens nets you bounty cash and experience; the former can be used between waves to buy weapons and ammo and the latter lets you level up your class, unlocking stat boosts.

The sequel looks a whole lot better – Tripwire’s moved from the ancient Unreal Engine 2 to Unreal Engine 3 – and under the hood every one of the game’s key systems been redesigned to give you more choice in how you play.

Killing Floor 2’s set to become the bloodiest games on PC, too. Besides the dismemberment points that will see maps become cluttered with bits of body, each level can become painted in blood. Tripwire’s made two versions of every map, one clean and one bloody. As you kill your way through the ten waves the clean level texture is dynamically wiped away to reveal the blood-coated one beneath.

Many of the infected from Killing Floor are back and more hideous than before. The Flesh Pound is genuinely hideous. He’s been beefed up considerably to become more threatening but the way he holds himself is terrifying. Wilson tells me the guy they’ve used for mo-cap is a major cause of the enemies’ new found menace. “The guy we worked with on that, Jackamo Harvey, was a great find. He was quite superb in the mo-cap studio in San Diego.” 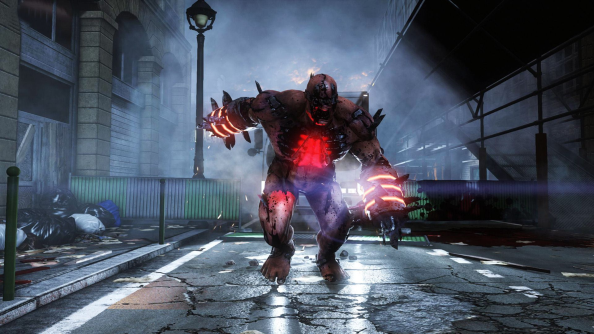 It’s not just little extras, Tripwire’s redesigned Killing Floor’s core systems to let you play how you want. Take the perk system, to level up your class in Killing Floor you had to perform very specific tasks: as a Commando you needed to kill Stalkers with Commando weapons, for example. Wilson says that this “led to people getting annoyed with each other and bickering over who’s Stalker that was.” Getting XP in Killing Floor 2 is much more straightforward. The Commando now gets XP for dealing damage with Commando weapons and for killing Stalkers. The tasks have been separated.

There are now 26 levels instead of just six. “Getting to Level 6 was a big grind and could take a very long time from Level 5, without any tangible reward along the way,” Wilson explains. “Now we’re setting it up so that there are 26 levels with small jumps.”

Wilson says the original perk system was too “prescriptive”, and dictated how people played. Supports got buffs to shotguns and medkits. As a result, all supports toted shotguns and medkits. Killing Floor 2 changes that. “Every 5 levels you level up a Perk, you get a new choice of Skills,” Wilson says. “Carry a back-pack and hand out ammo to your friends, or carry more ammo yourself? You decide.” Those choices aren’t fixed, either. You can change them between games. You could one build for solo play and one for playing with friends. 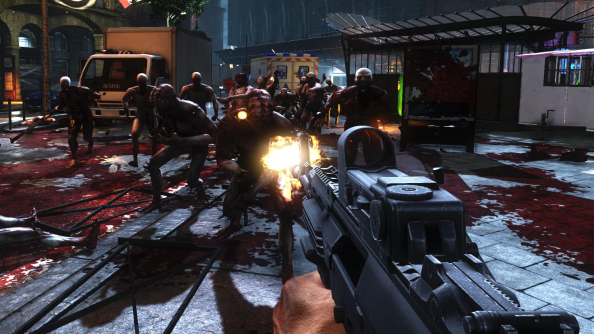 Tripwire’s changes are ingenious. Killing Floor 2 closely mimics the original but there’s much more choice and nuance throughout the game. Take level design: some of Killing Floor’s levels are more than five years old now, the players know where’s best to camp, when to move, what to expect. Tripwire don’t want to deny old tactics but, rather, “incentivise people to move around,” Wilson explains. “Dynamic lighting, so you can end up screwing yourself if you blow your favorite area to pieces too early in a game, making it all dark. New Zed attacks and moves such as crawlers on walls and ceilings, as well as Zeds appearing out of vents and manholes, will make it that much more challenging to find a corner and camp it.”

Killing Floor’s waves became harder as they went because each wave brought new species of specimen and in larger numbers. That’s still the case in Killing Floor 2 but now the early, weaker specimens become more dangerous, too. “You’ll find the Zeds learning new moves to use against the players as you go up the difficulty levels,” Wilson said. “This will make them harder to head-shot, for example, as some of them dodge and roll. The numbers do still crank up, so that hosing them with a shotgun or flamethrower is NOT an easy answer. And this adds a whole new dimension for long-term players as they have to learn to cope with changing Zed behaviors.” 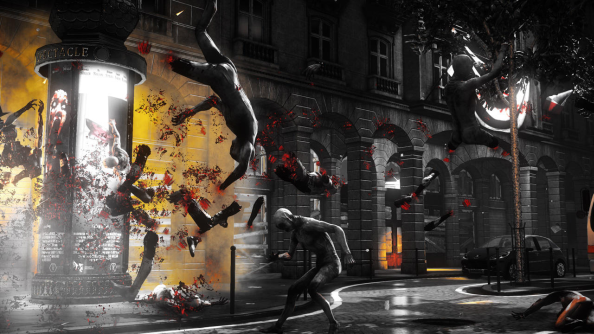 Killing Floor 2 will launch in Early Access later this year. The first build will offer a limited set of perks and maps which Tripwire will expand on until the game reaches 1.0. “The key we are looking for with Early Access is to get the balance nailed out right,” Wilson says. “The game is so complex now – think of a 6-player match, choosing from 10 Perks, each with 25 Levels and 10 Skills, using one of 40+ weapons, fighting all those Zeds and Bosses. The number of combinations and permutations is enormous. We need player volume and feedback to help us nail that.”

Even after Killing Floor 2 launches, Tripwire plan to regularly release new characters, weapons, and maps, as they’ve done for Killing Floor. Tripwire’s proven itself a studio which is very loyal to its fans.

Killing Floor 2 will launch on Steam Early Access in later this year, so you don’t have long to wait until you can blast lab specimens into steaming chunks of bloody meat. How long will it take you to find all five dismemberment points in each specimen’s skull?