After feeling the desperate need to watch a humanoid body explode into flames, playing Killing Floor 2 was a logical next step. The new Incinerate ‘n’ Detonate patch has just launched into a public testing phase, introducing new maps and character classes to the team survival game about killing nightmarish horrors for cash, to spend on weapons, to kill more horrors. I had a fun, if fairly simple, time.

It’s a game utterly disinterested in letting you know what you should be doing outside its very basic premise. A woman’s slightly harsh voice over lets you know there are things hunting you and, when you’ve killed them, she’ll let you resupply. I thought it’d be nice if, during this zombie-clone apocalypse, she maybe got rid of her capitalistic urgings and gave me the most powerful guns available without me having to pay for them, but figured now probably wasn’t the time to argue. 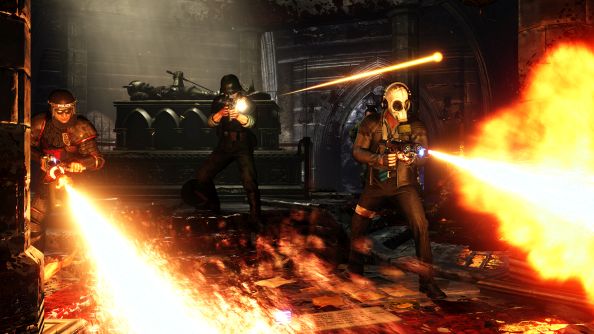 So I just got on with it, frying Zeds alive with makeshift flamethrowers or blowing them apart with grenade launchers. It was quick, it was action-packed, it had a rockin’ metal soundtrack to give it violent ambiance on top of the various flying limbs, leaking sockets and screaming. When I didn’t know how to do something, I looked up the control menu or muddled through – no tutorials.

That’s fairly common to Early Access, where information-laced intros haven’t had time or money dedicated to them yet, if they’re even planned. But it works best here because the simple enjoyment of pointing and clicking on undead heads is immediate, so I’m willing to experiment and discover. I’m sure on harder difficulties with angrier teammates I’d be dead and flamed in moments, but to begin with the game was very happy to accommodate my bumbling. 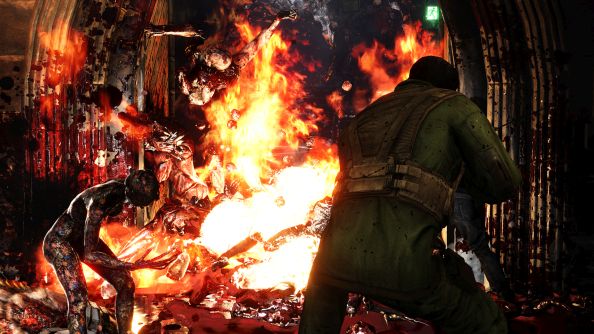 Of the new content, I gravitated more towards the Demolitionist. While the Firebug was better at AoE with their starting mini-flamethrower, the explosive pistol on the other side had the key benefit that it made things go boom. The tone of the game is such that base instincts like wanting to watch flashy lights turn running zombies into so much red mist took over and I immediately eschewed all other roles.

While progressing through a game, more money means bigger prizes, and the top tier for the Demolitionist is a full on rocket launcher. It will take out a whole horde of weaker enemies by itself, but therein lies a problem. By the time I’d unlocked these powerful guns, I was approaching the boss wave and the end of the map (when things reset and it’s back to starting gear). There’s little time to enjoy new-found power over lesser zoms before you’re no longer the biggest bully on the playground. 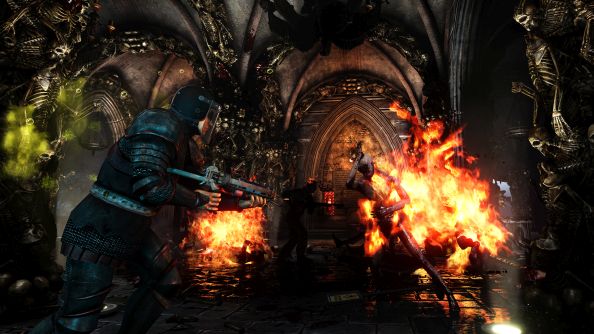 Currently there’s only one boss monster that can spawn at the end of a map and he’s an odd beast. Hans Volter is, unsurprisingly, a walking talking Nazi-science cliche, strapped into a metal exoskeleton with spiky fingers. He’ll throw grenades at you, try to poison you with gas, shoot you with a pair of sub-machine guns and irregularly just charge forward in the hope of ripping you to shreds.

Which may sound like a varied encounter but when it comes to fighting him with however many online pals have managed to survive, it gets samey quickly. Every counter comes down to backpedaling and pumping him full of bullets, shells and claymore hits until his invisible life total is finally gone. Then he falls limply to the ground while a victory message flashes up – after twenty minutes of fast-paced death-frolicking, I want something more satisfying.

If you’re interested in Killing Floor 2 but haven’t yet jumped aboard, I don’t think Incinerate ‘n’ Detonate is a reason to start. It’s a fine base for a few moments blasting away, but it’ll be far better once it’s built upon in the ways that are obviously intended. For those who already own it, there’s enough new stuff here to be worth a redownload – but be warned that servers are pretty packed with people just trying out the new stuff instead of attempting to make balanced teams.

Killing Floor 2 and the Incinerate ‘n’ Detonate update are available on Steamfor £19.99. You’ll need to set your beta options to download the latest stuff.