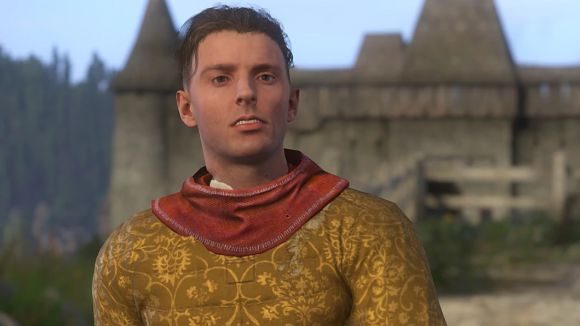 The next DLC drop for Kingdom Come: Deliverance offers not one, but two sets of new content for the game. As well as premium DLC package The Amorous Adventures of Bold Sir Hans Capon, Warhorse Studios will be releasing a second, free DLC titled Free-for-All.

Amorous Adventures follows the unfortunate journey of fan-favourite character, the lovesick Hans, in his attempt to woo the love of his life, Carolina. This being a Kingdom Come DLC, there are plenty of ways to do this, ranging from jewelry theft to love potions. According to Tobias Stoltz, Warhorse PR manager, the DLC will last for somewhere between 10-15 hours, and can be picked up either at the end of the game, or after befriending Hans in the course of a normal playthrough.

If that wasn’t enough (or if your bank account isn’t looking too healthy at the moment) a second DLC will drop on the same day as Amorous Adventures. Free-for-All is the tournament mode that was mentioned in the Kingdom Come roadmap that Warhorse released earlier this summer.

Not just a standalone tournament, however, Free-for-All offers players its own, smaller quest. Stoltz says that it’ll have around five hours of questing, as Henry tries to uncover the secrets of the strangely-successful Black Knight. After completing the quest line, you’ll have access to periodic tournaments, allowing players to win money and some impressive armor sets.

Stoltz didn’t offer an exact release date for either DLC, but we do know that they’ll release on the same day. We do, however, have a vague release window – Stoltz says that they’ll be out in “early fall, roughly a month.” With that in mind, keep an eye out for the new DLC in late September or early October.

The Kingdom Come: Deliverance DLC roadmap shows that we’ve got plenty more to come. There’ll be two more premium DLC releases – Band of Bastards and A Woman’s Lot – out later this year and in early 2019, while a free combat academy video, and modding support, are both set to arrive in the coming months.