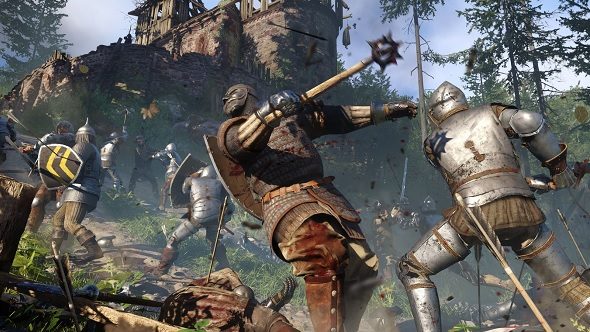 For those Kingdom Come: Deliverance fans who couldn’t make it out to E3, developers Warhorse Studios have released an hour-long gameplay walkthrough to show off their E3 build. Along with a chunk of the main story, this developer playthrough shows off its combat tutorial and a typical skirmish. You can watch it above.

Here’s everything we know about Kingdom Come: Deliverance.

Rather than most RPGs where you start as a knight or a mercenary, Kingdom Come: Deliverance has quite the humble beginning, with players taking the role of the son of the village blacksmith. Rather than slaying a dragon, your first quest involves running errands around the village to acquire the pommel and crossguard for a sword your dad is smithing. It’s no escape from an execution but it helps players get used to the main systems in Kingdom Come: Deliverance without being overwhelmed by enemies or wandering off the beaten path.

After grabbing the sword parts, you’re tasked with the difficult job of collecting some money owed to your father. This introduces Kingdom Come: Deliverance’s conversation system, as you have to persuade the village churl to pay his dues. Much like other RPG conversation systems, certain speech actions are determined by your stats, so a high Speech and Impression skill will allow you to charm someone, while a high “badassness” skill helps intimidate someone into doing what you want. Unfortunately, in this walkthrough, an intimidation attempt doesn’t quite work out, which forces the developers to beat up the village drunk to get their money.

The fight doesn’t work out, leaving the developers without their dad’s money and badly beaten. To forget their trouble, they show off Kingdom Come: Deliverance’s dice game, which can be played for fun or to earn some cold, hard cash. It’s no Gwent but it will certainly pass the time between missions. From there, the developers show off a different quest, which ends up with you and your coterie of chums having a massive punch up in the centre of the village. Medieval life sure was violent.

If you’re interested in Kingdom Come: Deliverance, the whole walkthrough is worth a look as it goes over the crime system, your standard combat encounter when you’re all kitted out with armour and sword, and much more.

Kingdom Come: Deliverance is set to release February 13, 2018, so you’ve still got time to practice your swordplay ahead of its release.