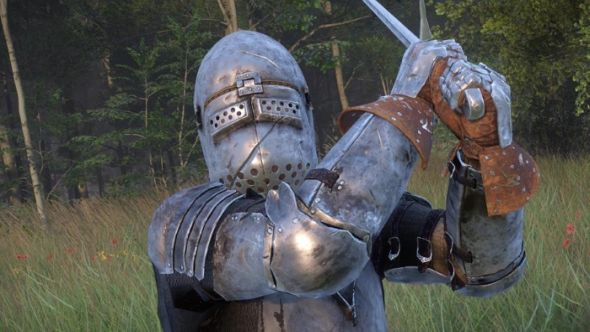 Pray your armour holds out, or get ahead with our Kingdom Come: Deliverance combat guide.

The mistakes are varied, and often small. Amateur historian Redditor MRPolo13 does acknowledge in his post that “fairly often, Kingdom Come gets the general shape right.” The issues arise, however, as soon as “any significant level of scrutiny is given to the armour.”

One example of the inaccuracy focuses on a breastplate. According to MRPolo13, it’s estimated to have been updated in around 1410, while the game itself take places in 1403. The plate is also Italian, meaning it’s possible, but quite unlikely, that it’d be worn by someone living in Bohemia, which is not only a long way from Italy, but prefered its German-style armour. The plate is also very slightly the wrong shape – the bulging shape of 14th and 15th century armour is apparently far more pronounced than in many reproductions.

MRPolo13 also suggests that Germanic armour was often covered by cloth, as this example from 1401 shows. Kingdom Come, however, focuses far more on ‘white armour’ which wasn’t covered by cloth. Again, it’s a small detail, but the redditor says “I believe that regional variations in armour and style are very important.”

There are plenty of other examples, focusing on everything from gauntlets to chainmail, but my personal highlights stem from the analysis of the helmets. A comparison of a helmet housed in the Polish Army Museum and those in game suggest some pretty glaring inaccuracies, from eyeslits that are too big, to a helmet that MRPolo13 claims he has never seen any example of, largely because it would have caused immediate murder by pollaxe if it was ever used in combat.