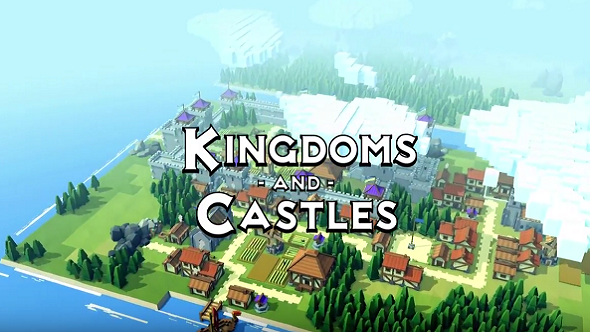 Kingdoms and Castles is SimCity via Game of Thrones. In it, you’ll set up a town, before turning it into a bustling medieval city. Instead of earthquakes and alien invasions, you’ll have to deal with marauding vikings and fire-breathing dragons.

If you like managing things, there’s plenty to manage in our list of the best strategy games.

Once you’ve been attacked, you’ll realise you need to build some fortifications, hence the ‘Castles’ bit of the game’s title. Before you know it,you’ll have your very own King’s Landing.

You’ll need to properly think when laying out your town as you need to keep the peasants fed and stave off plague. You’ll also have to set the right levels of tax to sustain your castle – make sure you do a better job than Joffrey. But, yeah, the game looks genuinely great.

Kingdoms and Castles developers Lion Shield comprises Pete Angstadt and Michael Peddicord, a duo who have worked on titles like Journey, Abzu, and Spore. The game was funded via Fig, where the team asked for $15,000, but ended up with almost $110,000.

Steam players seem to think it looks good, too, since they’ve launched it into fourth place on the Steam top sellers page. Mind you, at $9.99, it’s a bargain.