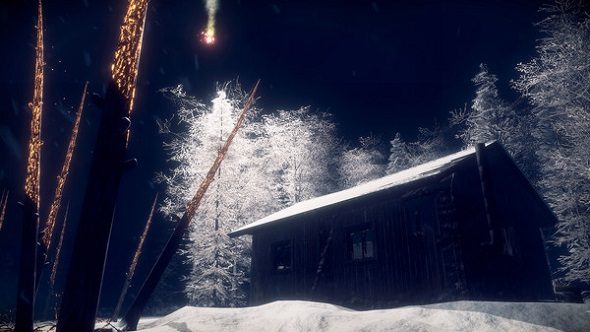 After a year in Steam Early Access, Parabole’s Canadian mystery adventure Kona is now available on Steam. Set in the northern reaches of Canada in 1970, Kona casts players as a detective who gets engulfed in a peculiar snowstorm while investigating a case.

For those who enjoying struggling against the elements, give these PC survival games a try.

In Kona, you play as private investigator Carl Fauberet who is hired by wealthy industrialist W. Hamilton to uncover the culprit behind several acts of vandalism on his hunting mansion. Upon reaching the village by the mansion, Fauberet gets trapped within a snowstorm which blocks his route back home. With no-one, not even his client, present in the town, it is up to players to get to the bottom of this mass disappearance.

While it looks like a horror game at first, Kona is light on the scares and heavy on the intrigue. The eerie quietness of the village is quite disconcerting, as players try to piece together what happened to all of its residents. You’ll have to explore the vast white expanse around the village to find out what has gone on, delving into caves and abandoned cabins to collect evidence. Just beware of what lurks in the forests at night.

Kona certainly nails the feeling of mystery, when you combine that ‘70s era aesthetic and the setting of an abandoned rural community. With music from the Quebec folk band Curé Label and some great atmospheric sound design, you’ve got yourself one immersive adventure.

For those looking for a budget trip to Canada this spring, you can’t go far wrong with Kona. It is currently available on Steam for $19.99/£14.99.