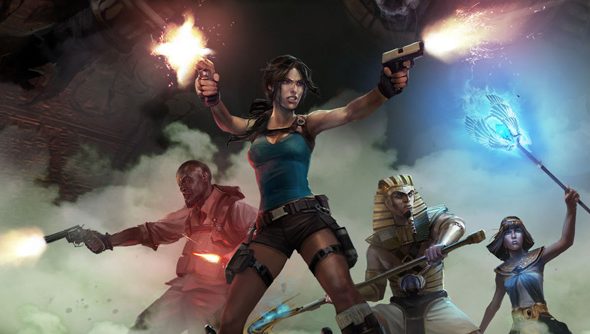 Barring an overwhelming change of heart from Phil Spencer over Rise of the Tomb Raider’s Xbox exclusivity, there’s no way we’re getting a Tomb Raider on PC in the near future that isn’t Lara Croft and the Temple of Osiris. But that’s okay! Not only is the isometric puzzler not quite like anything else on this most varied platform, but it’s learned some lessons from big, blockbustery Tomb Raider too.

Jeff Wajcs worked on Temple of Osiris’ predecessor, and designed plenty of the puzzles you find on and off the critical path in the last Tomb Raider – including a couple of its challenge tombs.

“There are a lot of things I learned from Guardian of Light and from Tomb Raider in 2013 that I was eager to bring over to Lara Croft and the Temple of Osiris,” says the lead level designer in this developer diary.

So what’s new in there from Jeff and team? There are the Uncharted-and-Prince-of-Persia-style redirected beams of light – but more impressive is the way the game adapts to changing numbers of players.

Like a good family boardgame, Temples of Osiris can be enjoyed by one-to-four players, and the same puzzle might be resolved rather differently with a friend or two in tow. Combat is rebalanced according to player numbers, too, and boss encounters are scaled up to match.

Isn’t it nice to see Crystal Dynamics put together a sillier, less grounded version of the Tomb Raider universe? I like the wall-mounted eyes that dart back and forth as the player dodges poison traps.