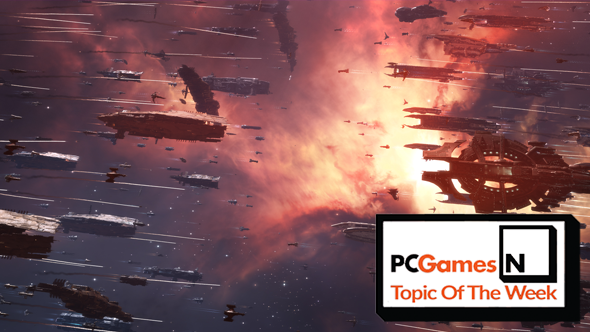 The sounds of battle are still ringing across Eve Online after this week’s huge fight over the game’s largest, most powerful and fully fitted battle station. It’s all coming to head on Saturday when the final timer will make the battle station killable again and huge numbers are expected to show up – 6,000’s not even a high estimate.

You’ll be thinking of your favourite MMOs for this one then.

It leaves us with a question – what’s the largest multiplayer event you’ve taken part in? Ben did a bit of 40-man raiding back in the day, though expects most world bosses involve more people than that now. This isn’t necessarily going to be the one where you had the most fun, especially given the stability of online servers in the early days, but the very biggest.And no, Twitch Plays Pokémon doesn’t count.

We’re also particularly interested in hearing from folks who were at that fight in Eve – or any on that scale – and are planning to head down to Tribute again this Saturday. What’s it like? Did you have fun despite the 10% time dilation? Any kills?