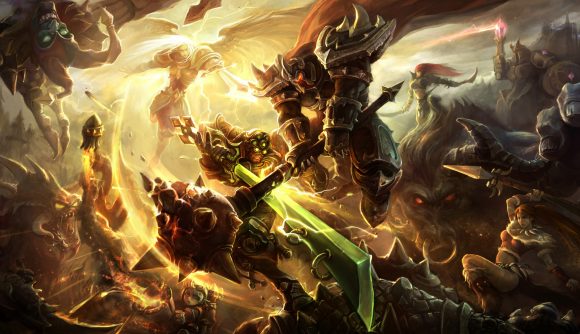 It is no secret that League of Legends developer Riot Games is working on a fighting game. Three years ago, the company bought up a team of fighting game luminaries in Radiant Entertainment, but it’s taken until today for the studio to finally confirm it is working on a new competitive brawler.

“I wanna be able to let people in on the worst-kept secret in the universe,” Radiant co-founder Tom Cannon says on today’s Evo Twitch stream, “which is that we are working on a fighting game for Riot.” Exactly what that game will look like – or even what it will be called – remains to be seen, but sounds like it will build on the philosophy of Radiant’s previous project, Rising Thunder.

“The reason why we did Rising Thunder in the first place was because we felt like fighting games deserved to be enjoyed by way more people. As big as things are, we think it has the potential to get bigger. Step one was we made a little indie fighting game, and we learned a lot there. At Riot, what we’re really trying to do is make something that players here can really be proud of.”

In a statement to USgamer, Riot says “We’re working hard to create a game truly worthy of the vibrant fighting game community and are making progress, but still have a long way to go before we’re ready to share more details.”

The one other hint we might have came back in November, when Riot filed trademarks for something called Legends of Runeterra. We still don’t know for sure what the project is – it could just be an idea for a merchandising line – but it sure would be a solid name for a League of Legends fighting game.