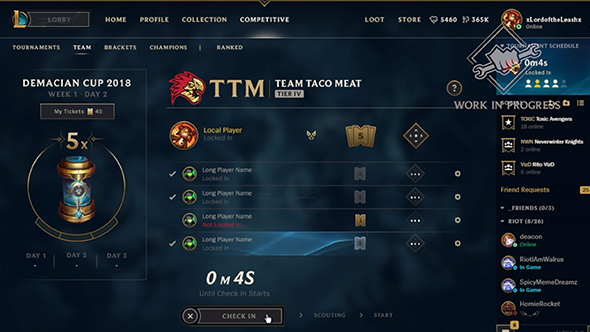 League of Legends is getting a new high-level competitive mode built for premade teams in 2018. Called Clash, this mode is Riot’s attempt to bring esports-like competition to teams of every skill level, and it’s already in beta testing with a full launch scheduled for 2018.

Check out the details on League of Legends patch 8.1.

Clash will run in short sessions of a few days at a time, a few times a year. You’ll have to buy in through tickets, which can be purchased with RP, Blue Essence, or in-game missions. That allows Riot to put more meaningful rewards at stake, which they’re hoping players will be showing off for years to come.

Teams of any rank can hop into clash, and Riot want this to be the ultimate way to play competitive League. You’ll be able to scout your opponents to properly consider picks and bans ahead of the game, and you’ll even be picking champs in the same draft format as the pros.

Clash is currently in beta testing for select regions, and Riot say they’ve got plans in mind to deal with the smurfs who can bring down a competitive mode like this. Clash is expected to launch in 2018, and there’ll be a more in-depth reveal “soon.”