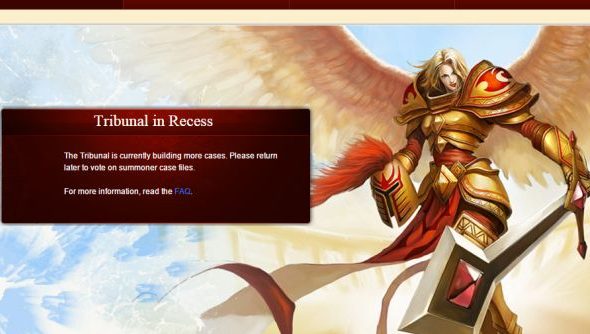 The League of Legends Tribunal was somewhat unique outside the likes of Runescape – a system that allowed players to review and adjudicate on reports of bad behaviour in the community and help improve one of the best free games on PC.

It’s been down for nine months for reworks, and players are starting to miss it. Riot have apologised for the delay – while pointing to stats that show toxicity is already way down thanks to a few other behavioural measures.

In the time the Tribunal’s been away, Riot’s machine learning system has become “extremely aggressive” in tackling racism, homophobia, sexism and death threats. Riot’s metrics show that sort of abhorrence appearing in about 2% of matches worldwide now – which, by League standards, is low.

“An interesting ‘test’ is to think about your last few games, and think about the last time you actually saw someone use the ‘n’ word, or c*nt, or similar obscene phrases,” wrote LoL social systems designer Jeffrey Lin on the LoL subreddit.

A new intentional feeder detection system has brought about record lows on that front, and the LeaverBuster tool implemented two months ago has been successful too.

“This is not an excuse for the Tribunal’s delay,” saidLin. “Tribunal’s been down for 9 months, and we know that’s a long time.”

Reworking the Tribunal has required fundamental tweaks not only to LoL’s report system backend, but also to chatlogs and Riot’s network of websites. The wait will bring tangible benefits for users, however: the ability to review and reward positive behaviours with in-game bonuses, for instance, and better accuracy in detecting troll voters.

“There’s huge value in the ability for players to directly contribute to the community standards, whether it’s rewards or punishments,” saidLinlater in the same thread.

Have you missed passing judgement on the very worst of LoL? This week, Riot have been tackling League of Legends harassment on Twitch.