With the patch for League of Legends’ Worlds championships locked in, it’s time to look towards the tournament itself. This year, one of the world’s biggest esports tournaments is getting even bigger, and we’re here to help you keep track of it all.

Get up to date with League of Legends with the 7.19 patch notes.

We’ll start simple. The League of Legends World Championship (colloquially known as ‘Worlds’) is an annual competition hosted by the game’s developers, Riot Games, to find the best League of Legends team in the world. The tournament begins with the group stages, progressing through a knockout tournament to the Grand Final.

Every year, Worlds is held in a different region, and China will be hosting the 2017 tournament. Matches will take place in four locations across the country, with the finals taking place in Beijing.

Worlds kicks off this year on September 23, with the opening ceremony taking place at 13:00 local time (06:00 BST). The tournament will rumble on for a while after that, not coming to an end until the Grand Final on November 4.

How does it work?

Worlds 2017 begins differently to previous tournaments. This time around, we’re starting with the play-in stage, a brand-new stage that aims to give a place on the international stage to teams from all 13 regional leagues. The play-in teams will include the third seed from the biggest leagues (NA, EU, China, and the LMS), as well as top seeds from Turkey, Brazil, Oceania, and Japan, among others. There are 12 play-in teams in total, four of whom will eventually advance.

After that, we move on to the group stages, from which the top two teams from each group will advance to the knockout stages. That’ll mean eight teams will progress, heading to quarter-finals, semi-finals, and a Grand Final.

Different rounds will run for different lengths. For example, the first round of the play-in stage will be single games, but the second round will be best-of-five matches. The group stages will likely be single games as well, but the quarter- and semi-finals will be best-of-three. The final will be a best-of-five round, with the winner taking home the coveted Summoner’s Cup, as well as the lion’s share of the prize pool (the total amount of money awarded at Worlds, which is divided up incrementally among the top four teams).

What else is happening?

As ever, Riot are putting on a show across League of Legends. That means a whole bunch of cosmetics, decals, and missions will be arriving in client soon. We’ll break it down for you.

Every year, Riot release a championship skin, celebrating the most influential champions of that year’s esports scene. Previous years have seen skins granted to champions like Zed, Thresh, and Shyvana, and this year Ashe is getting the championship treatment. As an added bonus, Ashe is getting a golden chroma, a loading screen border, and a summoner icon, all of which are available throughout the tournament. Riot have also announced that 25% of profits from Championship Ashe will add to the Worlds prize pool, and Riot will match that figure in donations to three charities.

To celebrate Worlds in-game, Riot get decorating, and Summoner’s Rift has already received it’s yearly esports touch-up. The Summoner’s Cup logo is embossed in each team’s base, and in the centre of the map. If previous years are anything to go by, team logos will also be added to each team’s base at the start of every match. 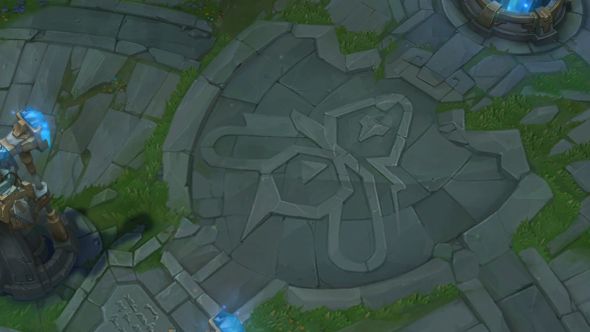 Riot have also announced that team emotes will be making a comeback, with 56 emotes available in total. That’s one for each of the 55 teams in the tournament, and one extra Summoner’s cup emote.

Baron’s also getting a Worlds makeover. Nashor’s new gear has already been shown off, and you can check it out in the video below. That’s also live in-game right now, so go take a look for yourself!

Rounding off the Worlds celebrations are a whole bunch of store items. Riot are pulling out all the stops on this one, providing new loot, daily missions, and bundles for roles, Championship skins and the Challenger skins.

You can get the full rundown on all the new items, skins, decals, and more here, courtesy of Riot.