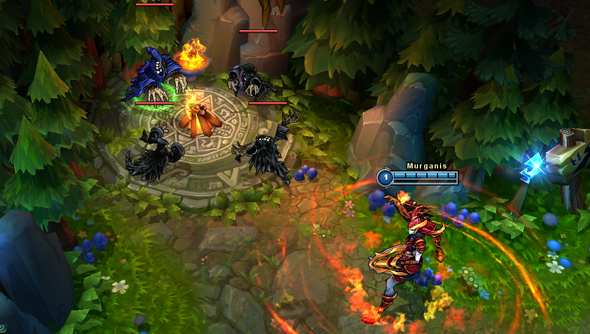 Jungling has a problem. The role is dominated by a small gaggle of League of Legends champions who exemplify speed and ganking ability, and teams tend to bend their selections and strategies to fit. But in the upcoming 2015 preseason, through new monsters, buffs and items, Riot hope to change that.

“We realise jungle diversity improvements have been a focus a few times in the past (has it been every season?),” wrote the developers. “But this time around we’re taking bigger steps.”

This season’s optimal junglers have been Kha’Zix, Evelynn, Rengar, Elise and – underlined several times in red pen – Lee Sin. There’s so little wiggle room that players can feel like the game’s choices are made for them “by the time the loading screen is up”.

“Not only is this not delivering the level of excitement League of Legends should bring, but it takes the strategic decisions out of a role built around strategic choice,” said Riot Fearless and Axes.

“Without the constant presence of a lane opponent, and without interesting decisions to make, the jungle position becomes less deep and diverse.”

Riot’s plan for 2015 is to regrow the jungle in such a way that more decisions can be made on the fly, in reaction to the changing circumstances of a match.

Their first action has been to cut back the map bias toward fast-clearing junglers who double up on their sustain through offense. Basic camps will be given a “pretty hefty” base stat increase.

Each jungle camp will now grant a unique buff the first time Smite is used on them. For instance, Gromp offers a poison armour that deals magic damage after time. The idea is that the buffs will determine which camps junglers choose to take.

What’s more, a new, harmless monster will occupy a river camp. The scuttle crab will run from attackers, leading junglers out of safety and into small skirmishes up and down the river.

Finally, the Hunter’s Machete can be upgraded to one of four new role-agnostic items – the Stalker’s Blade, Poacher’s Knife, Skirmisher’s Sabre and Ranger’s Trailblazer.

They’ll each change a player’s Smite spell to enable a particular kind of jungling, but can be purchased by Fighters, Assassins, Tanks and all sorts.

“The only requirement is that the action they help you to do has to be important to you as a jungler, whether as a strength that you want to reinforce or a weakness that you’re looking to shore up,” say Riot.

What’s put you off jungling in the past?