This month one of League of Legends’ oldest champions will be exhumed from the pit he’s languished in for almost five years. As Yorick the gravedigger takes up his trusty shovel once more, a fresh rework will fix what many fans consider to be the most unloved character in the game.

Reworks are a unique part of LoL’s ongoing development, and offer their own set of challenges compared to the usual MOBA fodder: coming up with new challenges or overall balance patches. While making a new LoL champion is a blank page, giving an existing one a makeover is often harder work, as Riot’s champion and gameplay designers Andrei “Meddler” van Roon and James “Statikk” Bach tell us.

“Yorick is one of the no-brainer champions we needed to do,” says Statikk. “He was created in an era where LoL champions were coming in at a much more rapid rate and he really fell from both a visual and gameplay perspective, not sitting in with the rest of the game as well. He was in this level of champions that we promised to players for several years that we we’re gonna come back and do it.”

Releasing in the first half of LoL’s current pool of 132 champions, Yorick the Shepherd of Lost Souls was the first of a select group who can summon units to fight for them. LoL being a game fairly averse to micro control groups compared to other games borne of RTS heritage, it gives the ghouls a simple aggro AI and thus they are not very effective. Something had to be done about Yorick, but LoL’s fairly rapid and complex patching schedule doesn’t offer much time for mulligans.

“Basically, for each patch cycle we do a prioritisation exercise at the start of that period,” says Meddler. “The balance team and a bunch of the playtest team will sit down and identify the characters that are so strong there are basically no other choices, or characters that are so far below the bar they feel terrible to play, that just aren’t worth picking in any context. Then whittle it down to X number of characters we think we can get done within that period based off how big each individual drop looks.”

“[Yorick] was one of the remaining ones that was obvious to do,” Statikk adds. “There wasn’t a particular event or some kind of thing that really did it. It was a culmination of years, we knew it and we’re just trying to get around to it.” 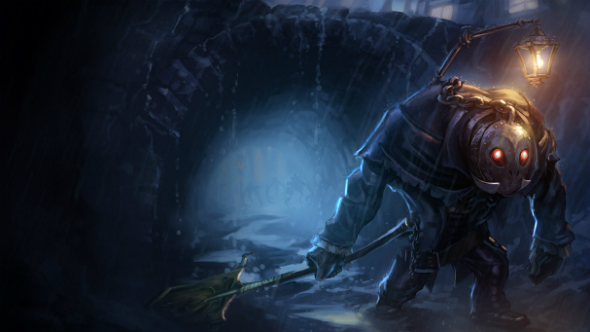 Over those years fans didn’t give up on the buried top laner, constantly asking when he would rise back into the land of the relevant. But tackling the changes Yorick needed requires an approach from several angles, taking into account his lore, iconography and creating a fun but balanced player experience. The first two of these seem deceptively simple, creating a stronger backstory that pits the lowly gravedigger as something more suited to a battleground of demi-gods, while simplifying his character design motifs. Gone is the lantern hanging over his head, deemed too much of a trope for a cemetery tender, while strengthening the influence of his cape made of souls and of course his weapon, a shovel.

The only thing then is to ensure the man matches the myth by tying gameplay design to character and backstory. Despite his lore heralding Yorick as the leader of an unfathomable army of ghouls, his current kit would only spawn them on ability casts. As it’s not always smart to spam your entire repertoire of spells at once, opponents ended up swatting one or two away at a time on lane making him feel decidedly less heroic than his design and simply irritating lane opponents.

“The biggest [feedback criticism] was honestly that the character was pretty boring to play,” says Statikk. “He’s a little bit mindless and in not a great way. You kind of press his buttons in an order and out comes this pretty thing no matter what you do. So we wanted to give him a much more interesting way to be played, a way that he can impact the game.” 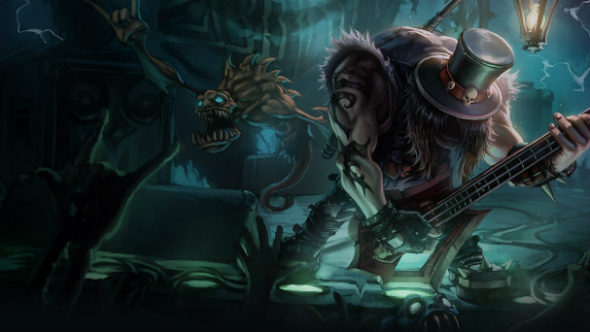 Rather than simply spawning ghouls with no AI, Yorick will now have a passive which creates graves at the death of enemy champions and also after a certain number of minions die, depending on your skill level. He can then use one of his actives to raise up to four ghouls from these graves at once, while using his two other standard abilities to create a wall (of rotting flesh, yay) around enemies, or to slow them.

The slow also paints the chosen enemy as a target for your mindless buddies who will immediately stop punching minions to come help you win a fight. While this might make Yorick more fun to play by giving him skills with greater control over his unique ‘army of the dead’ aspect, there is a risk of playing into one of the other criticisms old Yorick fell afoul of.

“His character was also one of the most frustrating characters to play against. He’s this very big, what’s known in the community as what’s called a ‘lane bully’,” Statikk says. “He has the skills and throws everything in there and you have to deal with it, right? We really wanted to make sure that there was more context, more ways that enemies could also deal with what he was doing, or at least enjoy dealing with the ghouls rather than just being victims of them.” 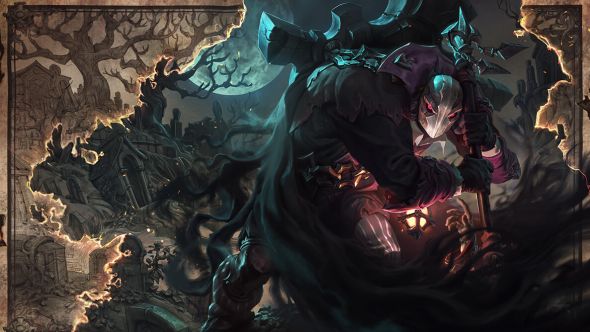 The biggest problems of failing to enjoy playing as Yorick and not enjoying playing against him are then at complete odds. Players want to be able to create large swarms of ghouls, but they also don’t always want to be fighting against them. This was the primary design consideration for Statikk and the gameplay portion of his rework.

“One of the big points of playing and having fun is amassing a ghoul army,” he says. “Right now he maybe has one or two ghouls at a time. Most just die off, and come back and die off. We wanted give him much more moments where he could build a significant army that would really threaten a push down a lane. So he can choose when to raise his ghouls, and he can keep building up these graves in an area, and summon them up when he wants to.”

Additionally, Yorick’s new ultimate allows him to spawn even more ghouls, summoning the Maiden of the Mist who will progress down the lane she is spawned in, along with up to four ghouls of her own, taking out everything in her way. Even enemy minions that die in her presence will be resurrected into a ghoul if she has fewer than four at her side, making tower pushing a breeze. Also, given her autonomous nature, Yorick can be a powerful split-pusher while still contesting other objectives on the map like Baron or Dragon, creating opportunities for his team to get at least something out of every engagement. But with so much potential to get ghosty, what of the concerns of frustration when playing against the necromaster? 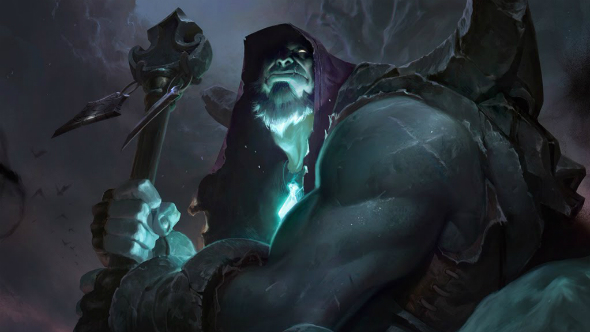 “We really wanted to make sure that the ghouls weren’t just constantly being spammed in your face, you weren’t always just fighting ghouls all the time,” Statikk says. “That’s why we created windows of time – there’s a lot of ghouls in there and no ghouls after that for a while – where we wanted to give some relief to whoever he’s playing against it. You’ll see that in the design hopefully.”

For fine-tuning champs, rather than cutting a whole new tapestry of cloth in construction of a new champion, the team will work heavily with player feedback. The initial design goals for Yorick came from player surveys and from delving deep into forums, with little regard for their own health or sanity. But League being the multi-million dollar eSports phenomenon that it is, they also look to more refined viewpoints.

“For champion updates, we will often bring on-site professional players or some of the really dedicated champion mains who play them,” says Meddler. “Recent example, we’re working on Katarina’s rework and we’ll put Scarra [William Li, former Dignitas mid-laner and CLG head coach] on a couple of times to give him a play and see what his feedback is like given his connection to the character. We find the pros here can be exceptionally helpful, especially ones that have got a lot of experience.” 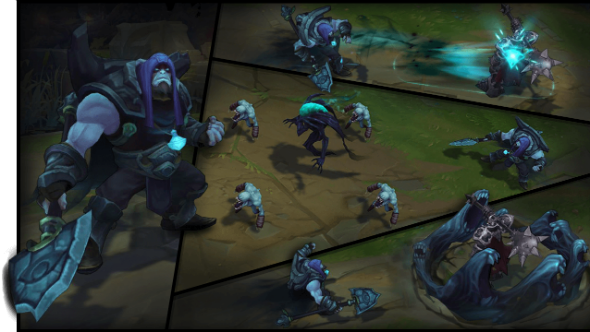 So, given Yorick’s rework, who did the team find to make sure the eternal gravedigger gets his fair treatment?

“We didn’t really find a particular pro player or big player on this champion because, honestly, he doesn’t have a whole lot of affinity with the players. He’s just not that interesting or exciting a champion so nobody has that attachment,” Statikk says. “We do have people who understand the mindset and perspective of that kind of player that wants to play Yorick and we definitely asked for feedback there. But there wasn’t anybody notable that I think really… He’s someone who doesn’t really have that magic that other LoL champions have, and part of us wanted to give him that magic.”